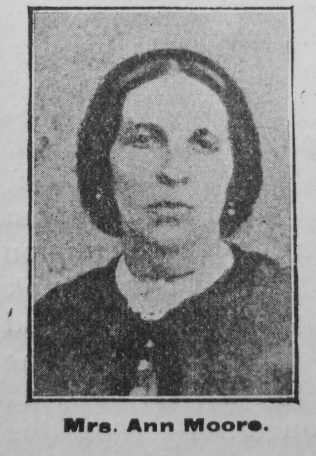 Transcription of Obituary in the Primitive Methodist Magazine by J. Ashworth

Mrs. Moore, wife of the Rev. William Moore, whose maiden name was Ann Russell, was born at Goudhurst in Kent. Although fifteen miles distant, Primitive Methodism was introduced into Goudhurst from the Kentish town of Maidstone, and Miss Russell and her devoted mother were among the most ardent workers.

Miss Russell became an ornament to the young society, evincing a deep attachment to the means of grace and a profound love of the Bible. This she made her daily study. In those early days a Bible class was commenced by the Rev. John Parnaby, of which Miss Russell was a very regular and devoted member. Gifted intellectually, and devoted to the study of the Holy Scriptures, there was evidenced a steadiness of character in her early youth which eminently fitted her for a life of future usefulness.

Accordingly, on July 3, 1863, she linked her destiny in marriage with the Rev. W. Moore, who for over forty years found her a true helpmeet in the work of the ministry.

Mrs. Moore was highly esteemed as a class-leader and greatly blessed in visitation of the sick.

For the last twelve months of her earthly course, although able to get up every day, she was prevented from her loved enjoyment of attending the house of God by a distracting cough, which she bore with great patience and resignation. Retiring to rest as usual on Saturday, August 15, she awoke her husband about two o’clock on the Sunday morning, and at four she gently and peacefully fell asleep in Jesus, to awake on the Sabbath which knows no end. What a calm but glorious change from the brief Sabbath on earth to the eternal Sabbath in the skies.

All that is mortal of Mrs. Moore was interred in the beautiful Colchester Cemetery on Saturday, August 22. The funeral cortége was attended by a large number of sympathising friends, among whom were several ministers of various denominations, to express their sympathy with Mr. Moore in his great bereavement, and their high appreciation of his beloved wife.

Her death was improved by the writer on the following day in the Artillery Street chapel, Colchester. This is the honoured Chapel where Charles Haddon Spurgeon found the peace that passeth all understanding, and where a splendid tablet is erected to his memory.

Mr. Moore received many letters of deep sympathy from a very extensive circle of friends, expressive of high appreciation of his beloved wife. Death to her was no surprise, the anticipation of it spread no gloomy cloud across her path, but in a full age, like a ripe shock of corn, she was  gathered into the heavenly garner.

Ann was born on 9 June 1819 at Goudhurst, Kent, to parents Richard, a shoemaker, and Elizabeth. She was baptised on 25 July 1819 at Goudhurst. Her father had died by the time of the 1841 census, and her mother worked as a laundress.

Ann was working as a school mistress before her marriage (1861).