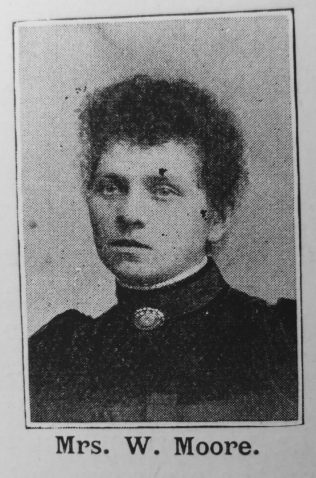 Transcription of Obituary In the Primitive Methodist Magazine by F. Jeffs

The death of Mrs. W. Moore (Aug. 22nd), at the immature age of thirty-one years, has been a painful surprise to many, and has caused deep and widespread sorrow. A pile of letters, most of them not of the commonplace, conventional order, but evidently the expression of profound feeling and sharp grief, written to her husband and other bereaved relatives, witness to the esteem and affection she had won for herself during her short career. The circumstances, too, render the event all the more pathetic and regretable. Her husband. Rev. W. Moore, a promising young minister of the Liverpool district, had just reached his first superintendency, having been appointed to the charge of a new circuit (Hindley), and the anxiety was being equally shared that the new superintendency and the new station should be managed successfully. They had scarcely settled in their new sphere when a fatal illness quickly frustrated the purpose of co-operating to this end, and Mr. Moore is left alone after a brief married life of four years. Mrs. Moore’s health had not been satisfactory for some time, the cause lying, it is thought, in a certain hereditary weakness (tendency to stomach ulceration), but her spirit was habitually so cheerful, and her nature of such an active sort, that none dreamed of such a serious issue. The disease, however, developed with great rapidity during the last few weeks preceding her decease, and the inevitable termination was soon arrived at. These observations, of course, are made from the stand-point of human loss and disappointment. It is natural and hardly avoidable that such regretful words should be spoken. But they are not spoken complainingly, as though Providence had done us a wrong. We have too much experience of Divine goodness to allow of complaining. In the case of Mrs. Moore, the great change has come to one about whose future blessedness we have the “full assurance of hope,” and the event, sad as it seems from our point of view, has really given her character a setting which facilitates a more vivid perception of its many features of excellence, and a more adequate appreciation of them.

She was a child of the Church in whose fellowship and service she died. Her father and mother are Primitive Methodists of many years’ standing, and the former has been a man of extraordinary activity in Church work. Mrs. Moore inherited the intensely practical nature of her father. From her earliest years, in school, in the choir, in collecting for Missions, and other funds, and in general Church industry, her usefulness has been marked. Life for her became definitely and consciously Christian as far back as May 6th. 1883, when, on a Sunday evening, she (Annie Cowan), with several others, gave themselves in open service to Christ. The preacher was Mr. J.W. Chadwick, of Barrow-in-Furness, a young layman who has since then by his ability and earnestness, gained for himself a good degree. His text was somewhat prophetic viewed in the light of later events— “I must work the works of Him that sent me, while it is day: the night cometh when no man can work.” Probably more than we know she was ever under the influence of the apprehended shortness of opportunity. Hence for her to be a Christian was to be a diligent worker. In home, or school, or Church, there never was any reserve of strength on her part.

A leading characteristic was her remarkable modesty, the beauty of which has, perhaps, never come fully into view until we find her no longer with us. She was always, though so active, utterly unpretensious and unconscious of personal importance. She lived at the opposite extreme to affectation, vanity, and artificiality. It never seemed to occur to her that she was intended for distinction, social or religious. Yet this was not owing to actual weakness, to dullness, or to a low ideal. There was always a power in possession which had a subtle way of making itself felt when required, a dignity which knew how to discourage rudeness, fussiness, or unfairness. And character such as her’s became is never attained to where only low ideals are. For to her diligence and unobtrusiveness were added a childlike purity and guilelessness, a sweetness and brightness of temper, a concentration on the Christian ends of life, and a faithfulness to duty; and so her few years of womanhood took on an exceptional strength and lovableness. These graces shone with increased brilliance when she came to the responsible and more exposed position of a minister’s wife. Her husband speaks as one stricken with the sense of a loss, almost if not quite, irreparable, remembering her as a thoroughly efficient, a most devoted, and entirely unsel?sh helpmeet.

From the Preston Brook and Liverpool 3rd Circuits, where they spent the four happy years of their united life, have come touching and beautiful testimonies which tell how this dear departed one was valued. Such love and such a feeling of bereavement could only be where the life had been proved to be precious. As the life was well lived, so the end was well met. Extreme suffering was borne with exemplary patience, and death was faced with the self-possession and serenity possible only where there is strong conviction concerning approaching translation to be “with Christ, which is very far better.”

The remains were laid to rest in the pretty cemetery of her native town (Dalton-in-Furness) on the Sunday following August 26th. Rev. W. Carr, the resident minister, officiating, assisted by Rev. F.E. Lindley. A multitude of sympathisers attended the funeral, many of whom showed the depth of their affection by unusual distress.

Such lives, ending so prematurely as it seems to us, do undoubtedly a great spiritual work. We suffer by their severance, and yet we realise them ever abiding with us and of imperishable value to us. “Their works do follow them.” They do not die. They come forth from the Father. Again they leave the world and go to the Father.

Annie was born in 1869 to parents Thomas Albert Cowan (sometimes spelt Cowin), a mining agent (1881), and Mary Atkinson Huddleston, who had married in 1864. The 1871 census describes Thomas as a local preacher and Mary as a dressmaker. Annie was baptised on 19 October 1869 at Barrow, Lancashire.