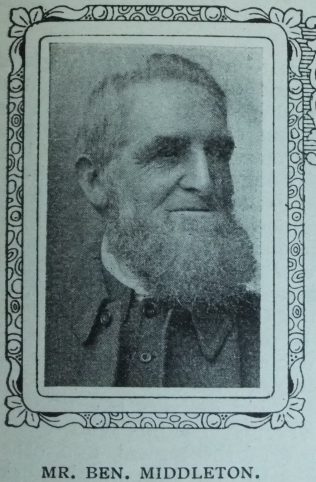 Ben. Middleton was born in 1825 at Compton, a sequestered village nestling at the foot of the Berkshire Downs. His father, William Middleton, was among the first-fruits of that remarkable mission when in 1829 John Ride and Thomas Russell were sent by Brinkworth Circuit to win Berkshire for Christ and Primitive Methodism. The cottage of the Middletons was the village meeting room and the preachers’ home, and around its open hearth plans were discussed for extending a work which has formed one of the most glorious chapters of the Connexion’s history. At one time Shefford Circuit had no fewer than twenty travelling preachers who beside the home part, were working on branches and missions covering two counties. The business of such a Circuit was consequently great, and sometimes the Quarterly Meetings lasted two days. William Middleton, who was the right-hand man of the superintendent, has been known to walk to Shefford and back on Monday, and start again on Tuesday morning, and by the time he had returned fifty-two miles on foot had been covered.

Happily the devotion of the father was to re-appear in the life of the son. Benjamin worked in the Sunday school, of which he has been superintendent over fifty years, and his name subsequently appeared as NO. 128 on the preachers’ plan of the Newbury Circuit. Though he has delivered hundreds of sermons in his native village no preacher is more acceptable. Everywhere Benjamin is welcomed. H has never been known to shy at distant appointments, though in the past they have not infrequently meant twenty or twenty-five miles on foot. His greatest delight is to be at camp meetings, and at the one held at Leckhampstead, a village eight miles distant, he has preached every year for fifty years.

His method has been to read everything that came his way, and to assimilate all good thoughts for future use. Hence he is always fresh, interesting, and possesses great adaptability. To young men he has been especially helpful. Said a large farmer (an Anglican) not long since, “My shepherd has got converted and become a teetotaller. He tells me it is through you. And let me thank you.” Benjamin considers the highest honour he has received was when, at the Edinburgh Conference, he was appointed to preach in the Grass market, on the spot where the Covenanters were burnt.

A total abstainer from early life, he has been indefatigable as a worker and speaker. For forty years he was foreman of the local iron-works, and for fifty-two years secretary of Compton Club, which was started in 1835 in his father’s cottage to keep the young converts from joining public-house clubs. This benefit society has had a surprising development, and now numbers nearly 3,000 members. Attached to every progressive movement and good cause, and fearless of persons or consequences in all matters of conscience, Benjamin has found the highest enjoyment in the strenuous religious life, and no man throughout the countryside is more respected and trusted. As primitive Methodists of the Newbury Circuit we all love and are proud of our Benjamin.