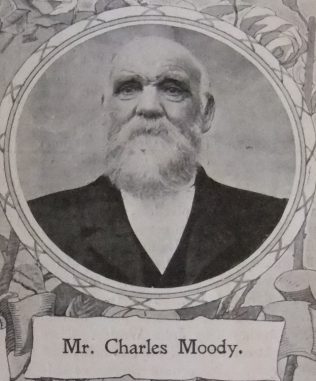 Mr. C. Moody has spent the whole of his life within the borders of the Southampton Circuit. Born at East Wellon in 1842 he remembers well being taught, frequently, in the parish day School by Florence Nightingale. He became a member of the church in 1865 and has taken his share of work and office since – School superintendent sixteen years, class leader thirty, and local preacher thirty-seven years. For the last three years he has very efficiently filled the office of circuit steward. He is a member of the Orphan Home Management Committee, regularly attends its meetings, and last year was elected its representative at Conference. He represents his parish on the Board of Guardians, hence finds plenty to occupy his time. To him the forward movement at Freemantle is largely indebted, he having given £35 towards the cost as well as time and labour. Mothing would give him greater joy than to see it prosper.

Charles was born in 1842 at East Wellow, Hampshire to parents William and Mary. William worked the land.

Charles began working on the land. The 1871 census records him as a butcher and in 1891 he was described as a grocer/builder. In later years he concentrated on building.