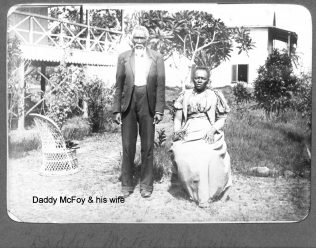 Daddy Macfoy was a leading light of the church in Santa Isabel, a local preacher, a class leader, at one time a circuit steward and always the mainstay of the choir.  He had a thorough knowledge of the tonic sol-fa, the system used in their tune-books.  Boocock recalled that for nearly a year Macfoy sent him a pint of milk every morning, ‘a luxury I could not purchase at 1/- per pint’ and noted that Mrs Macfoy was also extremely generous and kind.

He died on 14 November 1902, and the Revd George Wiles wrote: ‘Through the prime of manhood and right on until incapacitated by growing infirmity, he laboured unstintingly for the church of God … He was most exemplary in the regularity and punctuality with which he attended the various services … He was commendably generous, and delighted to aid the work of the church by his gifts.  Always mindful of others, cases of sickness or other trouble found in him a ready and sympathetic friend.  He was a true friend of the missionaries as they came and went, and their good health and successful work gave him great pleasure.’