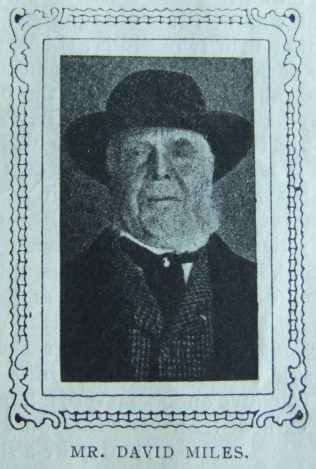 NEWBURY CIRCUIT is rich in its veterans, and specially in the quality of heart of those who are somewhat obscure. David Miles is a veteran Great-heart in humble circumstances. Born of Primitive Methodist parents, who helped to found our church at Ashford Hill, and in whose cottage services were held before a chapel was erected, attending class as a child with his father, but dating his conversion from his seventeenth year, his devotion to our Church has been lifelong. He has filled every office in his Society with much acceptance.

As the Society steward at Ashford Hill he has been a model in devotion to duty, ever watchful, both of the Society’s finance and its spiritual well-being, patient and punctual in the work of his office, not forgetful to remind unpunctual preachers of their remissness, nor long-winded “locals” of their folly of much speaking.

The gathering years have left their mark on Mr. Miles. His hair is white and his hearing is defective. But he still serves with distinction, and rarely is absent from morning school or service. The rigour of old age has been lessened by the Government pension and contentment sits upon his brow.

All his life he has loved our Church literature and is keenly interested in our Connexional movements. Our Missions are close to his heart, especially the work in South East London.

Apart from the round of Sabbath duties, the event of the week for him is the arrival of the “Christian World,” to which he has been faithful these forty years. Though in his seventy-ninth year his spiritual vision is undimmed. With a good courage, born of an assured faith, he looks forward to meeting his “Pilot face to face ” across the Bar.

David was baptised on 8 July 1832 at Kingsclere, Hampshire. His parents were Benjamin, who worked the land, and Sarah.