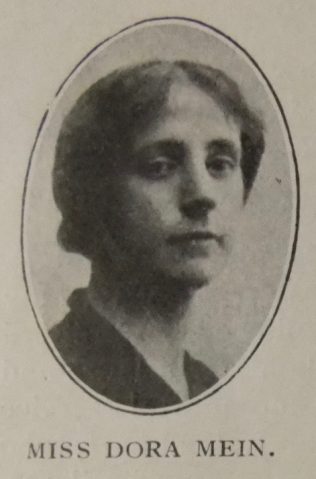 Transcription of Obituary In the Primitive Methodist Magazine by R.L

Miss Dora Mein, daughter of Mr. and Mrs. H.J. Mein, of Toft Hill Hall, was called to the “homeland” on March 13th, at the early age of twenty-six. Miss Dora possessed a sweet and charming disposition. Her refinement of heart and mind manifested itself in courtesy, simplicity and tenderness. She was absolutely unselfish and as radiant as a sunbeam. How loyal she was to the Church! Whether as organist, missionary collector, or any other work, she put her whole soul into it. A largely attended service was held in Toft Hill Church, conducted by Revs. J.M. Craddock, J.G. Bowran, T. Robson, T.A. Thompson, B.Sc., A. Westwood, and R. Laidler. She rests in the quiet burial ground at Etherley.

Dora was born abt 1889 to parents Henry Johnson Mein and Annie Collier. Henry was a colliery manager.