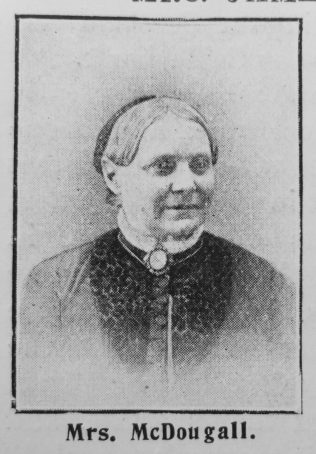 Transcription of Obituary In the Primitive Methodist Magazine by George Feaver

Our beloved and faithful sister McDougall passed quietly away on August 27th, 1901, at her residence, Stepps Road, near Glasgow. She had a long and good record, not only of faithful service for Primitive Methodism, but in all work connected With the Kingdom Of God. At the time of her death she was the oldest Primitive Methodist in Scotland, and had an unbroken membership of fifty-three years.

On September 28th, 1847, she was invited by Mrs. Hallam (wife of the Rev. Charles.Hallam) to a class meeting held at 3, ‘Tennant Street, Glasgow, though at that period she did not understand what such a meeting fully meant, and before she had been long in the meeting she wished she was outside again. The Spirit of God laid hold upon her, and when she was asked how she felt, said she was neither fit to live nor die. They stopped the giving of experiences, and had a prayer meeting, when she surrendered herself unreservedly to Christ. That was a blessed work, and meant very much for Primitive Methodism in Glasgow, as after events showed. She invited Mr. James McDougall to the class, and he was a converted, too. She was afterwards married to Mr. McDougall, and they served God and the Church faithfully till He called them to higher service in the year 1901, within five months of each other. While an exemplary Christian in every department, there were some spheres in which our sister excelled. Converted in a class meeting, she loved the Methodist class to the end. No sacrifice was too great to further its interests, and for many years she delighted to allow her home to be used on Monday evenings for that meeting. To keep its members together a quarterly tea was held, and no labour was too excessive to make that tea successful. She always spoke in the kindest manner to the young people who came, and her good advice, both here and in the Sabbath School, is still remembered as sweet fragrance by its recipients. So much was she concerned for their welfare that as she spoke her tender and loving words tears filled her eyes, and no one doubted her sincerity for a moment. It is interesting to notice in this connection that the first Primitive Methodist class meeting in Scotland was held in her mother’s house at Calderbank.

Along with her husband she was greatly interested in Sabbath School work, and at one period the school connected with Turner Street was far and away the best in the city. At that time Primitive Methodists were pioneers in such work, and many of their methods were copied by other Churches. And when there were not sufficient teachers she taught the Bible class with her baby boy in her arms. That boy has now reached man’s estate, and has become secretary of his mother’s school.

Mrs. McDougall’s sympathies were wide and deep. She often visited the sick and excelled in such work. She also gave of her substance to the poor sufferers, and many are the testimonies of the sunshine she brought into these people’s lives in such days of prostration.

And how true were the words of the Proverb-writer in her case! She was the virtuous woman who looked well to the ways of her household, and did not eat the bread of idleness. She was a loving mother, devoted to her children, who have now risen to call her blessed. Her home was always open for the reception of the ministers, and they frequently enjoyed her hospitality.

She loved the public service for worship, and the prosperity of Zion was her great joy to the last. She was ready to help all its institutions, both by her presence and money. And when weakness laid her aside she loved to hear of the services of the Church.

She bore her suffering with exemplary patience, and when the pain was keen, she quoted the promises and rested on them. Her last words were, “I know whom I have believed and am persuaded that He is able to keep that which I have committed unto Him against that day,” and thus she quietly passed away. A service was held in the Turner Street Church, before proceeding to Janefield Cemetery, and many friends gathered to render their last tribute of respect to her. All testified that she was a woman that feared the Lord and loved His people. She was interred on Thursday, August 29th.
“This sad old earth’s a brighter place,
All for the sunshine of her face;
Her very smile a blessing throws,
And hearts are happier where she goes.
A gentle, clear-eyed messenger,
To whisper love – thank God for her.”

The subject of this obituary was probably Drusilla Parkes who was firstly married to a Cooper. They had one child.