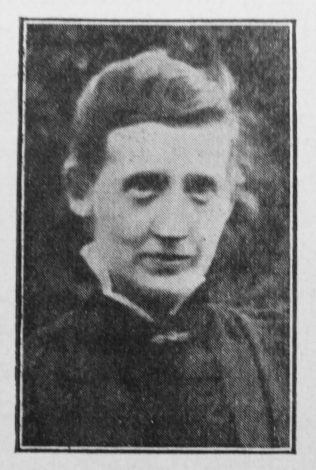 Transcription of Obituary in the Primitive Methodist Magazine by W.M.R.

In the death of Mrs. W.H. Mason our church has lost one of its most loyal and devoted daughters. She was born at Swinton in the year 1861, and was the eldest daughter of Mr. and Mrs. Jonathan Gerrard, one of the best known and most highly respected families in Manchester Primitive Methodism. From her earliest days she had the privilege of breathing a pure, Christian atmosphere, and when she was about fourteen years of age she definitely and intelligently gave herself to Christ and the Church. Until the hour of her death she served the Redeemer and her Church with both hands earnestly.

Her mental gifts were distinctly above the average. Her aptitude to receive and to impart knowledge was early recognised. She was keenly interested in all literary and social questions.

Her marriage to the Rev. W. H. Mason, of necessity, turned her thoughts and energies into other channels, but amid the exacting duties of a minister’s wife she kept in touch with the wider world, and had an intelligent grasp of public questions.

Her disposition was pre-eminently sensitive and sympathetic. She was easily roused by the exhibition of cruelty and injustice. For dumb animals, little children and cripples, she had a world of tenderness, and so far as her strength would allow, an unceasing ministry of help.

Upon her husband’s circuits she proved herself a real helpmeet to him. Her genuine piety, her bright, sunny disposition, her willingness to serve, endeared her to the people. As long as health and strength rendered it possible she added to her home duties other forms of service. As teacher of the senior class of young men or maidens she exerted a wide influence for good. Many letters bear grateful testimony to the memory of this work. .

During the five years of their ministry on the Ramsor circuit their home was in the village of Alton. Occasionally the little village pulpit was without preacher, and as a friend writes: “She wanted no pressing to take the service, and greatly to her credit, she could bring out of the treasury things new and old.”

The circuit steward of the Bollington Station (Mr. J. Allen) writes: “ She took a special interest in a class of young women which she gathered, and which she regularly met as long as health permitted.”

The Rev. S. Bond, Congregational minister, writes: “ I cannot forget her active resentment to all forms of abuse and wrong, for she loathed evil with a pure and holy dislike.”

Mr. G. Bearsdall, circuit steward on the Barnsley second station, writes: “In the service she rendered she was ever willing and devoted. She loved Christ and His Church, and found her highest joy in securing the interests of her Redeemer’s kingdom.”

Her illness was long and painful, but it was borne with Christian patience and cheerfulness. Many of the friends who visited her expressed surprise at her brightness in the midst of suffering. Her eldest daughter was most faithful and efficient in the home and in the sick room; both she and Mr. Mason, with all the members of the family, have the satisfaction of knowing that no effort was spared to make her burden a little lighter.

Though she was so greatly indebted to these tender, human ministries it was the grace of God that gave her buoyancy and hope all through the period of her affliction. She found Jesus Christ a very present help, and the promises of God a constant inspiration. Her hope was founded upon the atoning work of Jesus and was expressed in the verse she selected for her tomb stone, “The chastisement of our peace was upon Him, and with His stripes We are healed.”

The end came on Wednesday, March 8th,1905, and was unexpected. On the previous Saturday the bright sunshine tempted her out in the garden, but the cold wind proved too much for her weak state. She was buried in the beautiful cemetery at Oswestry, amid many signs of sorrow and respect, all the ministers of the town being present at the funeral.

The Rev. J. Whittle, who was preaching at Chorley Road, Swinton, the following Sunday, referred, in the evening service, to the time when he travelled there, on her home circuit with the Rev. W.H. Mason as colleague, and when Mrs. Mason was a teacher in the school. Mr. Whittle spoke of her Christian character, her intellectual powers, her patient courage in suffering. He asked for a message from the congregation to Mr. Mason and family, and to Mr. and Mrs. Gerrard; the congregation rose reverently and prayerfully, to indicate their sorrow and love.

Her passing strengthens our faith in the immortality of the soul. It is impossible that mental and moral powers, that had come to maturity through such discipline, and which were healthy and vigorous to the end, can have ceased. The body was weary and worn, but the mind and soul were in the noontide of their strength. They must be exercising a wider and more benign ministry in a larger place.

Elizabeth was baptised on 25 November 1860 at Chorley Rd PM Chapel, Swinton, Lancashire. Her parents were Jonathan Gerrard, a joiner and builder, and Jane.