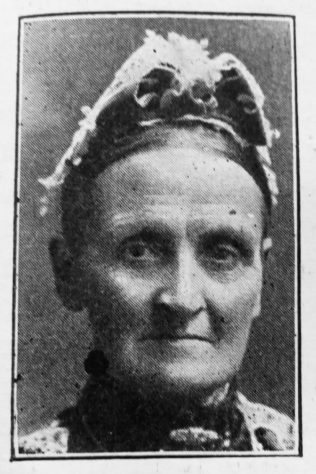 Transcription of Obituary in the Primitive Methodist Magazine by I.G.

When Mrs. Elizabeth Moore, of Yorescott House, Askrigg, passed to her eternal home, the Middleham Circuit lost a willing worker and a friend and helper of every good cause. Like many whose love for the Master and interest in the affairs of His kingdom and the church began in early years, she could not point to any particular day as the day of her conversion. She did remember, however, being taken, as a girl, by her mother, to hear a lady speak in the Friends’ Meeting House, and there she received an impression for good which never left her.

Our sister was a beautiful character, and to know her was indeed a privilege. The Rev. A. Graham-Bastow, of Crook (Baptist) writes: “She was a gem of the first water, if Christian lustre is to be judged by faithfulness, courage, and sincerity.” The Rev. E. Cairns says: “Mrs. Moore was one of the excellent of the earth, to know her was to respect and love her.”

The loss of Mrs. Moore does not only affect our own church, but also the free churches in the neighbourhood. She was a staunch Nonconformist, and was greatly interested in the doings of the Free Church Council and the Passive Resistance Movement. The writer knows how well she suppported her husband (Mr. John Moore) in his brave and determined resistance, in a difficult part of the country, to the Education Act of 1902. Her interest in the greater life of our church was very great, and she was always looking forward to the next issue of our magazines; especially the ALDERSGATE and “Messenger.” We have seen her face light up with real joy as she came upon the portrait of, or some reference to, a minister who had stayed at her home, or travelled in the Middleham Circuit. Ministers and laymen of different churches have borne testimony to her kindness and hospitality; Baptist, Wesleyan, Congregationalist, or Primitive Methodist, they were all the Lord’s servants doing the Lord’s work, and they were welcome in her home. Ministers who have travelled in Middleham Circuit during the last twenty years, will not easily forget her kindness and unfailing care for them.

What most impressed those whose privilege it was to be intimate with her was her great love of the Bible. God was very real to her, and His purposes in her life, though not always clear, were wise, just, and full of love. Never did this steadfastness of her faith in the goodness of the Father reveal itself as it did in the closing days of her life.

Worn and weary through much suffering, she manifested a patience and thoughtfulness for those around her which was beautiful to behold. On July 21st, 1905, she entered into the life “where is no pain.”

She was buried in Aysgarth Churchyard, the ministers present and officiating being the Rev. John Forster, of Driffield (who was present by the request of our sister before she died), Rev. O.W. Hughes and Rev. T. F. Carr (Congregationalists) and Rev. Irving Graham.

As we turned away from the graveside, filled with sorrow that we should know her no more on earth, we were helped to bear the loss by “the sure and certain hope” that we would see her again in “the great white morning of eternity.”

I have not been able to find a marriage record for Elizabeth and John, therefore I do not know her maiden name or parentage.

Elizabeth was married to John Moore (b abt1851), who was a farmer. He had previously been married to Jane (abt1849-1884), with whom he had five children. With Elizabeth he had one child, Elizabeth Eleanor (b abt1888)