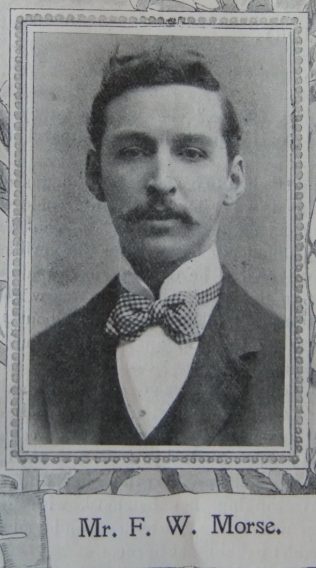 Younger Circuit Chancellors that Mr. F.W. Morse of Derby First, will be few and far between, and those more capable, hard-working and whole hearted will be even more rare.

Born at Shaw (Wilts), our friend was connected with Swindon First before removing to Derby, close upon ten years ago, and is therefore another instance of the debt which we owe to the sturdy Methodism of the villages.

Nonconformity runs in his veins as he is a Primitive Methodist of the third generation, his grandfather still living and being a local preacher of upwards of fifty years’ standing.

As well as filling the responsible position of steward of a circuit with six places, Mr. Morse is an earnest and intelligent local preacher, and is therefore never short of pulpit appointments; also class leader and Sunday School Superintendent at Traffic Street.

He has already represented his brethren at District Meeting.

Frederick was born in 1877 at Shaw, Wiltshire, to parents Jacob and Ruth. Jacob was a railway labourer.

As a youth Frederick worked the land. On moving to Derby, he worked as a railway carriage builder for Midland Railway Co.

Frederick married Alice Priscilla Bullock (abt 1874-1955) in the summer of 1901 at Derby, Derbyshire. Census returns identify one child.