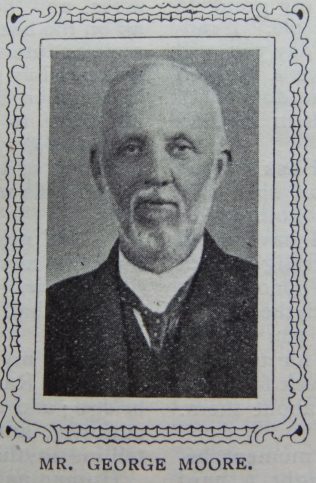 Our Tudhoe Colliery Society Steward, Mr. George Moore, is a man of marked individuality. His birthplace was Thornley, Co. Durham, and he made his advent in the “black days of the big strike” in 1844.

His parents were first hearers and then members in our Church, and thus our brother received in his earliest days his bent towards Primitive Methodism. His conversion took place when he was 18 years of age under the ministry of the Rev. Peter Clark, of whom he has yet the most vivid recollection. He was soon appointed Sunday School Teacher, and Assistant Class Leader to the Rev E. Cairns. Thirty-seven years ago Mr. Moore came to reside at Tudhoe Colliery and Spennymoor Station where he has laboured in many capacities.

Entering the Sunday School at once he was soon made Superintendent, a position he still retains. Then he was entrusted with the formation of a new class and held the post of Leader for over 30 years until failing health compelled him to retire. Despite this drawback he still serves as Society Steward, a task for which his systematic, orderly habit of mind eminently qualifies him. If, however, he delights in one sphere of service more than another it is his work as Secretary of the Station Finance Committee that is most congenial. Considering that he had no schooling in his boyhood, his dexterity with figures is simply amazing, and in this department he renders excellent service to the Circuit. Mr. Moore is a man of Connexional outlook, a fact recognised in his appointment on the District Committees, and his election to District Meeting and Conference. He is a loyal primitive Methodist, a single-minded conscientious man, a faithful toiler in our Church, and a generous supporter of our institutions. We earnestly pray that he may recover health and be privileged with long years of service.

George was born in 1844 at Thornley, Co. Durham. He worked as a coal miner.