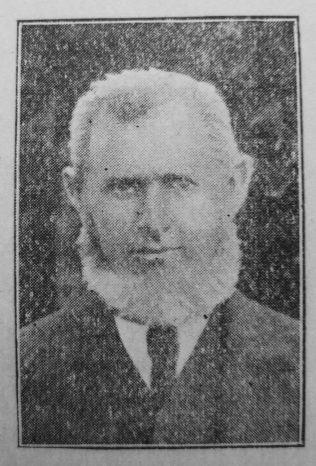 Transcription of Obituary in the Primitive Methodist Magazine by T.T.

The Walford Heath Church (Hadnall Circuit), has suffered a great loss in the decease of Mr. G. Morris. He was born at Haston near Hadnall, January 9th, 1843. When not quite sixteen years of age, he decided for Christ, and joined the society at Hadnall. When seventeen years old, he became a fully accredited local preacher, and served his circuit in that capacity for forty-three years with great efficiency. About thirty-five years ago, he removed to Walford Heath, and united himself with our society, of which he was a pillar, and a staunch and liberal supporter. He creditably sustained the offices of class leader, Sunday School worker, and superintendent, society steward and treasurer of school and chapel for above thirty years. He most regularly and punctually attended the public services, toiled assiduously for a weal of the Church, and rejoiced when Zion prospered. He was very happy in his domestic life. He was a devoted husband and most affectionate father. His six children are followers of Christ, and rise up to call him blessed. For some years his health had been failing. The end came rather unexpectedly. The last service he attended was on New Year’s Day 1903. No doubt, having a presentiment that his end was near, he bid farewell to some of his friends, stating it would be the last service he would attend. He was smitten down by pneumonia, and after suffering for a few days with conspicuous patience, he peacefully passed away on Friday, January 9th, 1903. His mortal remains were interred in the Baschurch churchyard, January 12th. There was a large concourse of relations and friends to pay their last token of respect to his memory. Sunday, January 18th, Rev. T. Tanfield improved his death, taking for his text the words of Moses: “O that they were wise, that they understood this, that they would consider their latter end.” There was a large and attentive audience. Suitable hymns were sung, and the “Dead March” in “Saul” rendered. May the bereaved be divinely sustained in their loss and sorrow.

I have not been able to identify George’s parents using online resources.

George earned his living as a shoemaker.

He married Catherine Abbott (1847-1930) in the summer of 1870 at Baschurch, Shropshire. Census returns identify six children.