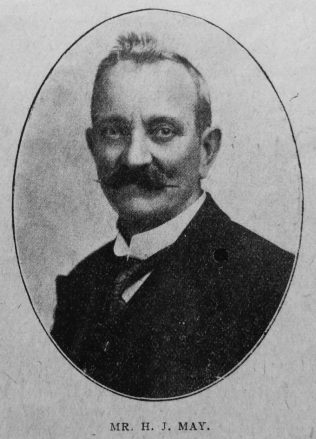 Transcription of ‘Sketch’ In the Christian Messenger by Rev. John Holland

Mr. H.J. May, the Society Steward of Dalling Road Church, Hammersmith Circuit, has been associated with Primitive Methodism nearly all his life. He is a sturdy product of village Methodism. His parents originally belonged to the Church of England, but his father’s sympathies for our people were awakened by witnessing the petty persecutions to which they were subjected through clerical influence, so he commenced to attend their services, got converted, and identi?ed himself with our cause.

The son was converted when a youth, and for several years was associated with a village society in the Silchester Circuit, but when seventeen years of age he came to London, where he has resided ever since. By perseverance and integrity he made his way, and for the last thirty-seven years has been in business for himself as a coachbuilder and wheelwright.

Forty years ago Mr. May was secretary of the Sunday school at Seymour Place, in the Marylebone Circuit, and for about a quarter of a century now he has been a member and official of the Hammersmith Station. He is a trustee of both Churches in the Station and for more than twenty years has rendered splendid service to Dalling Road in the capacity of Society Steward. There are few stewards who are more regular in their attendance at public worship or more devoted to the duties of their office. He is invariably there, and there to time.

As a Local Preacher and temperance advocate he has done useful work, and he manifests a keen interest in every movement that makes for the betterment of the people and the extension of the Kingdom of God. His circuit has frequently sent him as its delegate to District Meeting, and on several occasions he has had the honour of representing the London First District in the Conference.

Our brother takes his full share in public affairs. For nine years he served his fellow-citizens on the Borough Council. He has been chairman of the local Liberal Association, and is now a vice-president of the Gladstone Club. He is vice-president of the Hospital Saturday Committee for the Borough, a governor of the West London Hospital, and a member of the War Pensions Committee. In these and other ways he is continually working for the general good. That he may long be spared to serve the Church he loves so well is the prayer of all his friends and fellow-labourers.

Harry was baptised on 20 January 1856 at Kingsclere, Hampshire. His parents were John, a carpenter, and Sarah.