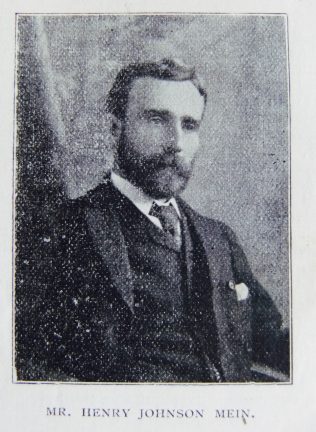 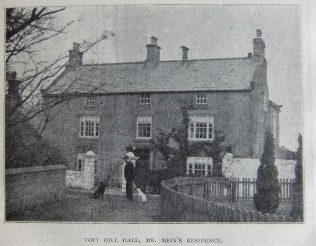 Transcription of Sketch in the Christian Messenger in the series ‘Local Preachers Worth Knowing’ by D. McKinley

It was a happy thought of the Editor to commence a series of sketches in the Christian Messenger of ‘Local Preachers Worth Knowing.’ It has made evident, what few of us doubted, that the Connexion is wealthy in worthy men, who are labouring ‘in word and doctrine’ for the glory of God. One of the many who is worthy of a prominent place in this series is Mr. Henry Johnson Mein, of Toft Hill Hall, in the St. Helens Auckland Circuit, in the Darlington and Stockton District.

Mr. Mein has reached to middle life, though he does not seem to have, he looks so young; but he has actually seen forty and four summers. Seaton Delaval, in Northumberland, with which is associated the early life of Mr. Thomas Burt, M.P., is the place of his birth. He is of Border descent. His father’s family belonged to Scremerston, near Berwick-on-Tweed. In religion they were Presbyterians of a strong puritanic type. It may be said, in the truest sense, that Mr. Mein was well born. His parents were deeply pious and intensely practical in their religious life. Home discipline was firm but affectionate, and the family rendered a ready and reverential obedience. The father, Andrew Mein, Esq., who is treasurer of the Orphanage Committee of the Darlington and Stockton District, is emotional in temperament, with a strong dash of Puritanism. He is familiar with the Bible, and is a useful and devoted worker in the Sabbath School. The mother, whose death was deeply mourned, had great self-possession. From her girlhood she was religious. She had literary tastes, and read with avidity and intelligence. Mr. Mein owes much to his parents; but he has personal merits, and has made his way by the clearness of his convictions, his strength of will, and indomitable perseverance.

His early education was obtained at the Seaton Delaval Presbyterian School. The Scotch school-master, Mr. McDougall, who is still living, may not have seen that he was a ‘lad o’pairts,’ but he is  now proud of his pupil. But those were not the days of School Boards and Educational Codes, and when the boy Henry was only eleven years and three months old he went to work. When he was in his fourteenth year the family removed to Buckworth Colliery. While there he worked during the night, and went to school during the day.

It is the lament of Sir John Gorst that many children are so employed in labour that they are quite unfit (he might have added unwilling) to receive instruction when they come to school. Happily it was not thus with Mr. Mein. He was not only fitted, but eager to receive intellectual instruction. He had come to experience what has been happily called ‘a state of healthy hunger for knowledge,’ which he sought by all the means within his reach to appease. When his father was manager of a Colliery at New Shildon, he turned his attention to mining, and by private study prepared himself for the examinations, and secured a first-class certificate. He took advantage of the City of London Guilds and studied mathematics and other subjects, and gained a first certificate for mine surveying.

As a colliery manager he generally wins the confidence and favour both of the owners and the workmen. On the occasion of the stoppage of the North Bitchburn Colliery, the workmen, with other friends, made him a handsome present of a marble mantle timepiece, suitably inscribed on a silver plate. He is at present manager of the Catherthorne Colliery, Toft Hill, near Bishop Auckland, and is much respected.

It is said of some men ‘their lives were uneventful,’ meaning by that that they have been destitute of novel experiences, startling incidents, or wild and exciting adventures. Speaking of life in this way is to look on it as a visible form of existence, rather than an invisible state of being – as an external rather than an internal matter. Of course full life embraces both, and the external is only true as it is the faithful expression of the internal. There is one event which takes place in the arena of spiritual being, and which constitutes the very life of life. This event we call conversion, regeneration, or the new birth. No event in the history of man can compare in significance with this. It marks the birth-day of the soul. This event took place in Mr. Mein’s life when he was still in his teens. Of course there had been years of preparation. The teaching in the Sunday School, the sermons of Rev. John Brown, Presbyterian minister, and the influence of his religious home, led on the travail of his soul, and at West Holywell, under the preaching of Mr. John Barnard, he was born of God. This solemn transition from darkness to light was marked. Christ came into his life and claimed his best thought and feeling and activity. He gave himself to Christian work without delay. He found a congenial sphere of labour in the Sunday School, nor has he laboured in vain. In appreciation of his services as superintendent, the teachers of the Howden School, in Crook Circuit, presented him with two valuable books, Dr. Fairbairn’s ‘The Place of Christ in Modern Theology,’ and Dr. G.A. Smith’s ‘The Historical Geography of the Holy Land.’ He encouraged the competitive examination in Sunday Schools, and in the teachers’ examination he won the first Connexional prize that was given by the Sunday School Committee.

Mr. Mein came on the plan with Mr. Hugh Walton, now of Wheatley Hill, in the Thornley Circuit, when he was in his eighteenth year. He soon became an acceptable and useful preacher. A few years after he came on full plan, the circuit recommended him for the ministry, although he was married. He took the examinations and was accepted as a candidate; but he afterwards withdrew from the list. It may be said, that if Mr. Mein had entered the ministry, he would have taken a place amongs the best preachers. His sermons are carefully prepared, and delivered with a graceful, persuasive eloquence. He does not depend on the occasion of a service, but with ‘oil well beaten’ he does his best to make the truths of salvation clear and convincing. He has acquired the habit of thinking, and creates rather than appropriates. Occasionally he betrays impatience with the stale and commonplace.

His reading is wide and varied. In theology and moral philosophy, in literature and history, he has been a diligent student. From the rigid Calvinistic theology of Dr. Hodge, of Princeton, America, he turns for relaxation and relief to the sweet and hopeful music of Tennyson. From the philosophy of Professor Malian, and a taste of eclectic Christianity from one of its modern teachers, he turns for a corrective to the works of Dr. Fairbairn, and to the recently published ‘Life of Dr. Dale,’ of Birmingham. Some men are voracious readers, but chronic dyspeptics as thinkers. They read too much and think too little; the consequence of which is that they make less of what they do read than if they read less and thought more. As a thinker, Mr. Mein gives evidence of possessing those qualities of mind, the powers of insight, abstraction, and generalisation. He looks on nature and the world with his own eyes, and to the bar of his trained judgment he brings the ever-pressing problems of life. He has strong convictions, but he is not offensively assertive or dogmatic. He aims at Catholicity of view, and while he has small sympathy with narrowness or exclusiveness, he cherishes a spirit of charity and toleration in respect of the views of those who may differ from him.

His culture is not superficial, lying like polish on the surface; but like all genuine culture, it is deeply rooted in a thoughtful, well-trained mind, and in a pure and tender heart. The fragrance comes from the roots of the flowers.

It was a blessing for Mr. Mein in the formative period of his life, when his intellectual and religious nature was quickened, that he was brought under the influence of some of the most thoughtful and spiritually-minded ministers of our Church. Of the many from whom he received encouragement and guidance in his reading and search for truth, he acknowledges the greatest indebtedness to the Rev. William Graham, whose memory is still fragrant in the northern districts. Other preachers, both lay and itinerant, owe much to Graham, and gratefully revere his name.

Three years ago Mr. Mein gave an address at the public meeting of the North of England Primitive Methodist Preachers’ Association. The subject assigned him was ‘The Duty of Church Members to Christian Work.’ The address was highly appreciated, and he was requested to send it to the editor for publication in one of our Magazines. It is cause for regret that as yet it has not been sent. Since the formation of the Local Preachers’ Association of the Darlington and Stockton District it has secured the sympathy and service of Mr. Mein. He is ever ready to read essays and give speeches on selected subjects, both in the circuit and the district assemblies.

As an official the merits of Mr. Mein have been recognised. He has represented his circuit in District Meeting, and he was a delegate to the Bradford Conference. Happy is the Church when her members quality themselves for all forms of service, and lay their gifts of nature and of grace upon her altars, as our friend has done and is doing. He is a ‘workman that needeth not to be ashamed, rightly dividing the word of truth.’

Henry was born abt 1855 at Seaton Delaval, Northumberland, to parents Andrew and Ann.