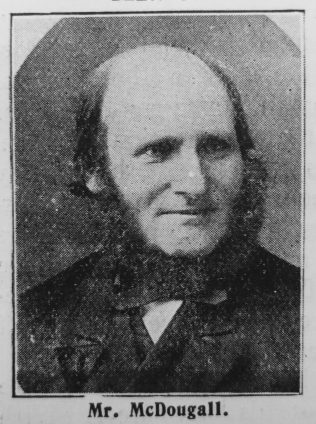 Transcription of Obituary In the Primitive Methodist Magazine by George Feaver

In the death of Mr. James McDougall, of the Glasgow First Station, on April 2nd, 1901, Turner Street has lost its oldest, most devoted, and most faithful worker. He had long ago passed his three score years and ten, but his interest in the House of God had not abated in the least. Though nearing seventy-five years of age, he loved the courts of God’s House and the place where His honour dwelt. He was converted when quite a young man, and how thorough that conversion was, and how devotedly he loved and served his Master, is best illustrated by his long, faithful, and arduous services in the interests of Primitive Methodism in the North British District.

Scotch by birth and descent, as his name would show, be exhibited the qualities of the sturdy Scotsman in every affair of his life. He was solid, and when once his convictions laid hold of him, he carried out his purpose to the end, though he should meet strong opposition in the way. But these qualities served him in good stead in the many dark as well as bright days through which Turner Street Church has passed. No matter who faltered, the steps of Brother McDougall were always steady and sure. He gladly gave time, money, service, and much anxious thought to the Church of his choice. He could truly say, “For the Lord God will keep me: therefore shall I not be confounded: therefore have I set my face like a flint, and I know that I shall not be ashamed.”— Is. i. 7.

He filled many offices, and adorned them by his character. He could do anything connected with the Church, but in certain spheres he excelled. He was a typical Sabbath School superintendent, and exercised an almost magic influence over the scholars. He loved them with the love of a strong nature, and was ever interested, both weekday and Sabbath, in their welfare. No work came amiss to him; even the composition of dialogues for the anniversary was congenial. He loved to see the children enjoy themselves at their annual soirée and excursion. And at 74 years of age he was quite at home among the little ones. His interest in children extended beyond the bounds of his own school, and both the Connexional Orphanage and Quarrier’s Orphan Homes of Scotland were the annual recipients of his subscriptions. Eternity alone will reveal the amount of good that has been accomplished by him during over fifty years of superintendency at Turner Street. His last appearance in Turner Street Church was on New Year’s Day, when he presided at the scholar’s annual soirée, and gave them what has since proved to be a parting message. It is interesting to notice that many of the customs instituted by Brother McDougall have lately been adopted by other schools in Glasgow and district.

As a local preacher he was equally faithful. “Whatsoever his hand found to do, he did it with his might.” He made many long journeys to preach the Gospel and was always faithful to his appointments.

Though not brilliant or eloquent in speech, he was a diligent student of the Scriptures, and preached the good news of salvation for all men. For many years he was District missionary treasurer, and Circuit Steward, and be greatly rejoiced in the spread and consolidation of Primitive Methodism.

As Church Treasurer he was deeply interested in his work. His great endeavour was to reduce the Church debt, and get into easier circumstances. This was accomplished by his efforts largely, and when bills and interest became due and there was not sufficient money in the funds to pay with, he would pay out of his own pocket and refund himself when he could. This was done not once or twice merely, but very many times during his career. In Church matters he would have everything straight and above board, and insisted upon having a clear statement of every event. His worth was recognised by many, and in various capacities he attended no less than six conferences as a delegate. His work as class leader was faithfully performed, and he gave sound and practical instruction to his members week by week, he himself being the practical example of the truths that he taught.

In the home he was a kind and indulgent father, and a loving husband. He was a sincere friend. Nature might stand up and say to all the World, “This was a man.” In business he did well for his family, and his sons are following in his footsteps. He was a laborious worker, and would always have some project on hand. He was very thoughtful and kind to the poor, and was always happy in sending relief. He hated all meanness and duplicity with all the hatred of his strong nature. Fully anticipating the end, after assuring his family that all was right between himself and God, he quietly fell asleep in Jesus.

His funeral was largely attended. A short service was conducted in the house at Stepps by the ministers of the Established and United Free Church of Scotland. Then a service was held in the Turner Street Church, and was attended by many people, including Messrs. T. Robinson and W. Goodrich, and Revs. F.J. Sainty, W. Glover, J. Sadler, W. Sutton, and G. Feaver. All these brethren took part in the service. His mortal remains were laid to rest in Janefield Cemetery on Saturday, April 6th, amid many expressions of sorrow. Both the Sabbath school and the congregation each sent a lovely wreath suitably inscribed:
“There is no Death; what seems so is transition.
This life of mortal breath
Is but a suburb of the Life Elysian
Whose portal we call Death.”— Longfellow.

James was born abt 1826 at Glasgow, Lanarkshire.