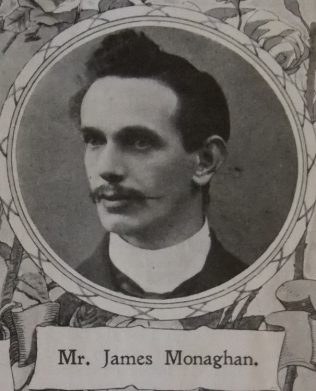 Mr James Monaghan has all his life been associated with our Paisley Church. Singularly modest and retiring he loyally serves the Church along the line of his special endowment. Specially trained in finance he renders valuable service as a circuit steward, and his forethought and counsel have had no small share in placing the finances in so healthy a condition. But one instinctively associates him with the service of praise. What a splendid choirmaster he is, and how brilliantly he and his choir have served our cause through all these years. Then from boyhood he has been connected with the Sunday School. Men so lovable and loyal are above price. He is heartily supported in all his church work by his genial and devoted wife and his talented family, one of his daughters acting with marked efficiency as church organist. To describe James Monaghan and his work in one hundred and fifty words is a task indeed, and I give it up.

James was Musician, to parents William Monaghan and Ann Robertson. James was of Irish extraction and Scottish upbringing. William, born in Ireland, was a labourer at an iron works.

As well as his musical talents, James had considerable gifts as an artist.

James started work as a clerk, rising to become a cashier.