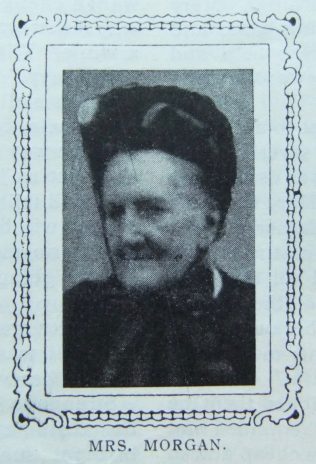 Mrs. Morgan was born at Litcham, Norfolk, in 1829. She was converted in the Wesleyan Chapel, Fakenham, in 1846. Thus early in life she made a full surrender of heart, mind and will to the Saviour.

All through the years, from that glad hour, it has been her supreme delight to listen for the Master‘s voice and to do His will.

Force of circumstances compelled her to leave the home of her childhood, with its precious memories. She came to London in 1855, and straightway joined the Wesleyan Church at King’s Cross. There her gracious influence was soon felt.

In 1859 she had a most dangerous illness, during which she was frequently visited by the Revs. Penrose and Barron. These were times of refreshing from the presence of the Most High. So much comfort and inspiration did she derive from these visits that she felt constrained on her recovery to join our Somers Town Society, King’s Cross. From that time she was one of the most devoted workers, and also a generous giver.

Her spiritual power was so marked that in 1880 she was by the desire of the Church requested to become the leader of a Society Class Meeting, and after seeking Divine guidance, she consented. That the hand of God led her into that position was shown by the success that attended her labours. She not only “allured to brighter worlds, but led the way.”

The Circuit ministers all found in her a “Dorcas spirit, full of alms-deeds.”

Failing health compelled her to relinquish her much-loved work, and now although “she waits beside the silent sea with muffled oar,” the writer always finds her bright, waiting with joyful anticipation the Master’s call. Heaven’s own atmosphere seems to fill her room from day to day. “ She hath done what she could.”

Jemima was baptised on 7 September 1829 at Litcham, Norfolk. Her parents were William Bulman and Elizabeth Rouse.

Jemima died in early 1914 in the Islington Registration District, London.