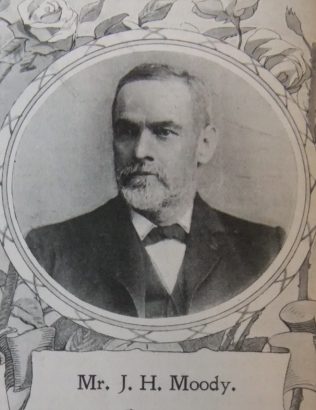 The Circuit Steward for Hull First Station is John Henry Moody, a man of sterling worth and integrity. He is not a local preacher nor class leader. “I have never reached that altitude of goodness,” he says, but he is a born financier and sound business man and delights to render service to the cause of Jesus Christ along his own special line. He is a Methodist of the third or fourth generation. His grandfather was a Wesleyan class leader of such broad sympathies that he opened his home for the early Primitives who visited his village and was threatened with all kinds of penalties for his liberal notions and conduct. His father was a saintly man who rendered fine service in the Scotter Circuit half a century ago. So that Mr Moody inherits all the passion of the past, linked with clear, keen, up-to-date business habits, begotten by a wide business experience. His penchant is figures and it is a delight to hear him declare his budget and set forth his proposals. For twenty-five years he has been associated with Ebenezer Church, and is one of its most trusted counsellors. He has been Circuit Steward for the past two years.

John was born in 1847 at Blyton, Lincolnshire to parents Christopher and Jane. Christopher was a tailor, draper and grocer (1851). John served an apprenticeship as a grocer at Horncastle. He moved to Hull and was living with a brother, George, in 1871. John later became a commercial traveller in provisions.