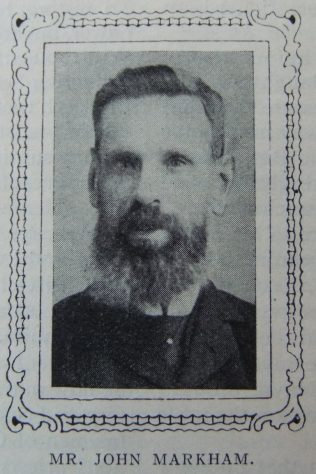 JOHN MARKHAM was born at South Leverton in 1849, and spent his boyhood days and served his apprenticeship in the locality. He came to Worksop in 1869, and has spent forty-one years in this town. For some time he resisted the gracious influences that came upon him; but he never forsook the house of God, always respected the sanctuary and the people of God, and loved to hear, as he does at the present, a good sermon.

In 1873, while listening to a sermon, he felt the Holy Spirit moving his heart, and was deeply convinced of his lost condition and need of a Saviour. He went home, knelt before God, and in true penitence confessed his sin and obtained the assurance of Divine forgiveness. He cast in his lot with our people, saying: “This people shall be my people and their God my God,” and for thirty-seven years has been loyal to his decision.

For thirty-six years he has been a local preacher and at present stands no. 2 on the plan, and is as well received by the congregation as in years gone by. Under his efforts many have been led to decision for Christ.

He has filled every office his Circuit could give him, has been delegate four times to the District Meeting, and twice represented his District in Conference.

As Class leader and Assistant leader he has acted for over thirty years and is a firm believer in it as one of the principal means of grace and a stronghold of Methodism. His aim is to make the Class Meeting bright, warm and attractive, and he never overlooks the financial aspects. He has known what sorrow has been through bereavement. It is his joy at present to be favoured with a good wife who supports him in all his work.

John was born on 1 March 1849 at South Leverton, Nottinghamshire, to parents John and Eliza. John, senior, worked the land.

John was converted under the ministry of Rev. James Shaw. He connected with the Newgate Street Chapel in Worksop. His obituary records that his commanding presence and sonorous voice, linked with definite conviction and earnestness, made him a great power. For many years he held the treasureship of the John Street Church and of Hodthorpe Church. With the Rev W. Hayton, John did much to start the cause at Creswell.

John earned his living as a boot and shoemaker.