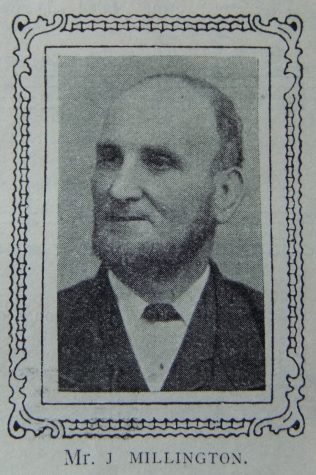 For about thirty-six years Mr. John Millington has been Leader of the Class at Drury Lane, Buckley Circuit. He has been a Sunday school teacher forty years and a local preacher thirty-eight. When converted he had to learn the alphabet. But since his conversion he has led a strenuous life and done his utmost to make up for his early disadvantages, and his endeavours to educate himself have been wonderfully successful. He is a man of fine presence. Wherever he goes he carries about him an atmosphere of good cheer. His life is full of Christian optimism. His mission is to inspire those whom he leads to attempt great things and expect great blessings from God. He takes an intelligent interest in all the affairs of the station. His outlook is not parochial. He loves his own church, but is deeply imbued with the real conversional spirit. He retains the ideals and religious fervour of his early days. There is always genuine “go” and “heartiness” where he is. His face is radiant because of the evident reality of his spiritual life.

He is a robust type of Christian. He believes with his whole heart that the saved man shows that his salvation is a vital experience by the life that he lives. A more vigorous and spiritually aggressive society it would be difficult to find than the one with which he is associated, and of which he is the leader. He lives in the church and for its highest welfare. He constantly visits the members of his class, and seeks to identify himself with their experiences. He is the father of a large family, and all his children are in fellowship with us, an eloquent tribute to the evangel he has preached, not only abroad, but at home. Long may he be spared to serve the church of Jesus Christ.

John was baptised on 23 April 1848 at Hawarden, Flintshire. He was born at Ewloe, nr Hawarden, to parents Thomas and Mary. Thomas was a collier.