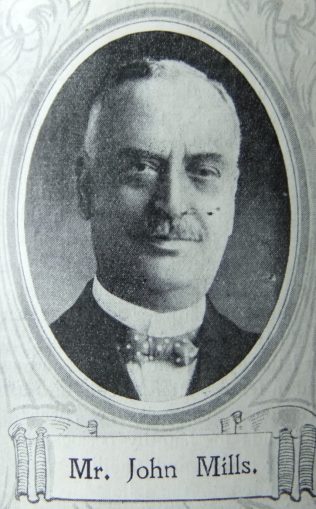 The Circuit Chancellor of Surrey Chapel is one of the best known and most highly respected of our London laymen. He is a product of village Methodism.

In his seventeenth year he saw the “vision splendid” and entered with complete abandon upon the service of the King.

The passion to declare the grace which discovered him soon manifested itself, and the year of his conversion witnessed his call to the great vocation of preaching.

To this sacred task he has given his best. He has given himself to reading and thought, and the fruit of his “pursuit of the best” is seen on those occasions (rare now through ill-health), when he declares “the unsearchable riches.”

Mr. Mills has held the onerous position of Circuit Steward for thirteen years, and has discharged the heavy responsibilities of his office cheerfully and with marked ability. Mr. Mills is a devoted servant of the Church, and is deeply attached to Surrey Chapel and its institutions. May his bow long abide in strength.

John was born in 1857 at Kingston, Cambridgeshire. His father, Henry, worked the land.

John was Trust Treasurer for Surrey Chapel for over thirty years and Circuit Steward for practically the same period. He retired from official responsibility at Surrey Chapel in 1921.

The 1923 article in the PM magazine identifies that John was a preacher of note, gifted with fine eloquence, and aglow with evangelical passion. His spiritual fires were kindled at a Methodist alter in a church in Buckinghamshire, of which his father was the Society Steward.

Whilst living at Bassingbourn, Cambridgeshire, John formed a society in the village based in a chapel loaned by Congregationalists.

On moving to London, John worked as a commercial traveller (1881). Later he became an estate agent and auctioneer.

John married Martha Emma Denham (abt1858-1919) in the summer of 1878 at Kensington, London. Census returns identify four of six children.