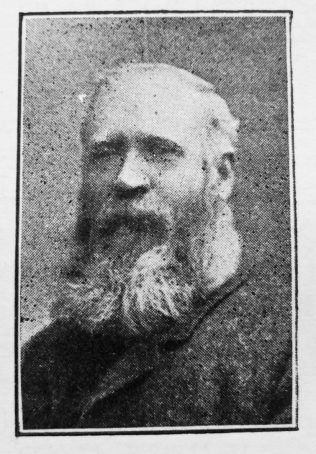 Transcription of Obituary in the Primitive Methodist Magazine by G. Newman

Sheffield Primitive Methodism and Sheffield 4th Circuit in particular have lost a noble and useful servant by the death of Mr. John Muxlow. He was born at Welbourne, Lincolnshire, and was the eldest son of James and Ann Muxlow, who were earnest workers in the Lords vineyard.

Of his father he often spoke as a most exemplary character whose piety did much to direct his youthful steps into the way of truth. He came with his parents to Sheffield when he was about eight years of age and was sent to the nearest Sabbath School. From this period to the end of his days his interest in the Sunday School never flagged.

When quite a youth he joined an Open Air Mission Band and did much good service for the Master in the streets. One day he was asked to visit a poor man who was sick. “As I prayed by the side of the dying man,” he said, “I heard a voice saying to me, ‘The man is hungry, give him something to eat.’ So persistent was the voice that I could not continue my prayer, so I rose from my knees and gave the man a shilling.” Poor John! he could ill afford to part with a shilling, for he was very poor, but he gave it in the fulness of his heart. John Muxlow never forgot that lesson, and through all the future years of his service his life was one sweet expression of benevolence. He was liberal to all from the Salvation Army to the Anglican Church, while his generous gifts to the poor and needy won him golden opinions from all.

Not long before he died, he gave £50 towards our new Sunday Schools at Walkley and it was his custom for many years at Christmas to send out gifts among the poor and thus lighten the burden of their life and give practical effect to the teachings of Jesus Christ. During the latter part of his life especially he was a man of deep and earnest piety – quiet but genuine – and most attentive to the means of grace and the business meetings of the Church.

Mr. John Parker, Circuit Steward, says of him:- “We shall miss his wise counsel and calm and deliberate judgment in our church meetings and also his genial and happy face in the pew. We all feel that we can ill spare such men in our Church.”

Mr. J.J. Webster says:- “The great inherent kindliness of his nature was apparent, and the warmth from his heart was continually flowing in the shape of many kindly deeds done to all around.”

Mr. J.G. Wallis writes of him as “One who was ever generous and kind and possessed of a simple childlike trust in his Lord and Master.”

Mr. Muxlow passed away to his rest on November 12th, 1905, in his 62nd year, the truest memorial of him being his good deeds wrought so simply and unostentatiously in the spirit of the Lord Jesus.

John was baptised on 3 November 1844 at Welbourne, Lincolnshire. His parents were James, who worked the land whilst in Lincolnshire and in Sheffield worked as a steel melter, and Ann.