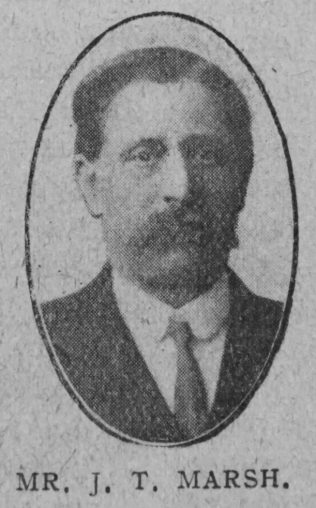 JOHN THOMAS MARSH was born at Holmfirth, near Huddersfield, on 7th April, 1876, and came to Kilpin Hill when a child of seven. He straightway joined the school in the old mission room at Kilpin Hill, in the Batley Circuit, which proved to be one of the formative influences of his life, securing his attachment to the Kingdom of God and His Church. When he passed away, a friend of mine summed up his life in a sentence: “He was a very helpful man.” And a colleague, speaking of him recently said: “He could not come often (i.e. to the public services), but when he came he was there.” He was so intense in his devotion to his church that his presence was felt by fellow-worshippers. He verily died with the name of Kilpin Hill Society written on his heart. One of the great joys of his life was to witness signs of prosperity in his beloved church, and on the other hand he sorrowed deeply at any slackness or indifference on the part of colleagues or fellow-members. He was jealous of the Church’s best interests, and he prayed that it might ever have its Gideon’s Army.

John Thomas Marsh was a man of vision, who felt dissatisfied with the plans and attainments of the hour, who believed that the best of life is yet to be, and was therefore anxious to have a share in the coming reconstruction of Church and State. He had made himself familiar with the political and economic problems of the times, and was ready to help to solve them, not for any personal benefit he might receive, but for the general good of the community.

In the pressure of daily affairs he had very little available time to spend in securing the mental equipment he desired, but the scanty hours he had to spare he used to good account. He was ambitious to be a Primitive Methodist local preacher, and to this end had provided himself with a very choice library, which he used well, as those who heard him speak can testify. The last Sunday afternoon he attended Kilpin Hill Chapel before his illness, he conducted the service and preached a very helpful sermon from the text: “Come, let us reason together.” The subject was one after his own heart, for he loved to appeal, to the highest and best in men.

It will be recognised by all who knew him that he was not only a man of thought, but of action. He honoured the study, but revelled in the battlefield of life. He simply pitied those poor souls who imagined that life was for ease and pleasure, and not for courageous use. He was old-fashioned enough to remember that “Satan still some mischief finds for idle hands to do.” His favourite hymns indicate his outlook on life, and one of his favourites was 301 (School Hymnal) :
“He liveth long who liveth well,
All other life is short and vain.
He liveth longest who can tell
Of living most for heavenly gain.”

Philip J. Bailey expressed the conviction of his heart when he sang:
“We live in deeds not years; in thoughts not breaths;
In feelings not in figures on a dial.
We should count time by heart throbs;
He most lives who thinks most, feels the noblest, acts the best.”

After a week’s struggle with pneumonia, on Monday, March 11th, at the early age of forty-one, he passed beyond our sight. “The end came, and the new beginning.” While we mourn the great loss of this brave soul from our society, one cannot but feel “that he, being dead, yet speaketh.” He testifies of a better life here and hereafter. “To live in hearts we leave behind is not to die.” Death is not the end of all, but the great change. To the true, the brave, and the good, death’s gift is the greatest and most glorious of all gifts. Yet how we fear it! We dread the unfamiliar and the unknown. We cannot refuse to recognise what our eyes see, that the crumbling dust rests in the grave; but the man of faith can travel beyond this elementary fact of life, and realise that the grave only marks a stage of the journey. Men need to-day the message of the eternal, undying, life, and those who bear the name of Christ should be the first to urge their fellows to have done with the senseless fear which chills the heart and stultifies our life. Our days are spent on the threshold of eternity. Let us look on the door of the larger life without misgiving or fear.

John was born in 1876 to parents Fred, a power loom weaver, and Rachel.

John married Margaret Firth (b1875) in the spring of 1899 in the Dewsbury Registration District, Yorkshire. Census returns and birth records identify three children.