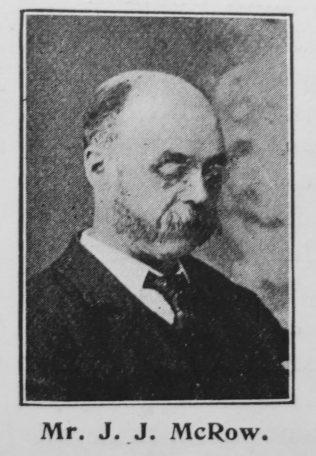 Transcription of Obituary In the Primitive Methodist Magazine by William Clulow

After an unbroken membership of over forty years in Cambridge, Mr. McRow passed away to his eternal rest on Friday, July 12th, 1901, in the 58th year of his age. He has long taken a great interest in the Sunday School, and in matters connected with the trust at St. Peter Street. He was ever on the alert after strangers visiting Cambridge, and solicitous for the welfare of the scholars leaving the town, In some cases keeping up a correspondence with them. He was Very regular in his attendance on the means, and rendered willing service in several offices connected with the Circuit, Chapel and School, as well as being a representative of the Circuit on the District Committees for years, so that his place will be somewhat difficult to fill. It had long been his earnest desire to see his son, Mr. H.O. McRow, a minister of our Connexion; and he lived to see that desire fulfilled so far as his son being a student at Manchester College, and to have him near him at the last. Mr. McRow was in attendance on his duties on Sunday, July 7, both in chapel and school, and during the week he was taken seriously ill, the doctor was summoned, an operation was considered absolutely necessary, and on the Friday following he passed away, but he had expressed himself as being fully ready in case death should come.

On Monday, July 15, a funeral procession of relatives and friends, from town and country, was well attended; and an impressive service was conducted in our St. Peter Street Chapel by the Revs. W. Clulow, R.W. Ferguson, and A. Morter, after which the interment took place in Histon Road Cemetery. Much respect and sympathy have been manifested toward the bereaved wife and family. On Sunday evening, July 21st, his death was suitably improved in St. Peter Street Chapel, to a good congregation, by the Rev. A. Morter, of Donington, an old and intimate friend of the family. May the God of all consolation be near to succour and bless the bereaved ones under this sudden and severe bereavement, and finally re-unite them as a family in the deathless clime.

John was born in 1843 at Ely, Cambridgeshire, to parents James and Elizabeth. The 1851 census describes James as a waiter.