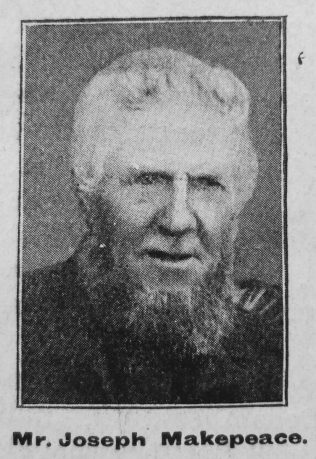 Transcription of Obituary in the Primitive Methodist Magazine by J. Toyn

Slowly but surely the old standard-bearers of Primitive Methodism, in Weardale are passing from us, and Frosterley Society and Westgate Circuit have sustained a severe loss by the death of Mr. Joseph Makepeace. He was converted when twenty-five years of age and for fifty years was  one of the most active and loyal workers in the Frosterley Church. In his time he filled nearly every office but that of local preacher. He was class leader forty years, choir-master thirty-five years, chapel treasurer twenty-six years, and always a diligent Sunday school worker, being one of the founders of our Frosterley Sunday School, and for many years its first superintendent. He also started our Band of Hope at Frosterley over thirty years ago. He was most regular in his attendance at all the means of grace and thoroughly consistent in his Christian life and character. His greatest delight, however, was found in singing the songs of Zion. He was possessed of a magnificent voice, and for nearly fifty years led the singing at the famous camp meetings at Hill End. The last camp meeting he ever attended, held on June 29th 1902, will long be remembered for its spiritual force and power. Our departed friend had a custom of rising early on camp-meeting day and going forth alone to the camp ground to intercede with God and pray for blessing on all the services of the day; and on this lovely June morning, at three o’clock, for the last time on the lonely moorland, our brother pleaded with God for souls.

It gradually became apparent to all of us that his course was nearly run and he was ripening for Heaven, but for some months after this he attended and took part in all the services with his accustomed fire and energy. Often the week-night service was brightened and inspired by his singing, and powerful, prevailing prayer. In November, 1902, he was laid aside with the illness which at last proved fatal. Yet in all his sufferings he never repined nor murmured, but fully trusted in God. It was a joy to visit him, and to hear his rich experiences, when, with flashing eyes, he spoke of old-time victories and comrades who had reached their reward before him. Though unable to leave his house in the past few months, he ever pleaded at the throne of grace for God to bless the Church he loved so well.

All that love could do to brighten his closing days was done, and surrounded by the members of his family he passed peacefully to be with the Master he had so long and faithfully served, on June 24th, 1903, at the age of seventy-five years.

The funeral service was held at Frosterley Chapel, and was attended by friends from all parts of the circuit. He was interred in Frosterley Churchyard, where many old Primitive Methodist worthies, who, with him, had often made Weardale ring with praise and song, now sleep their last long sleep. The Rev. C. Roberts conducted the service, the Revs. B. Dennison and J. Toyn also taking part.

Several letters of tribute to his worth and character have been received from ministers and friends who knew him, but the grandest monument to his memory is that all his family are prominent workers in the Church their father loved.

We bespeak for the widow and relations Heaven’s richest grace and consolation, and trust they will be kept faithful till they meet their loved one again in the land of fadeless day.

Joseph was baptised at Egglestone, Co. Durham on 9 April 1828. The record only names his mother as Mary.