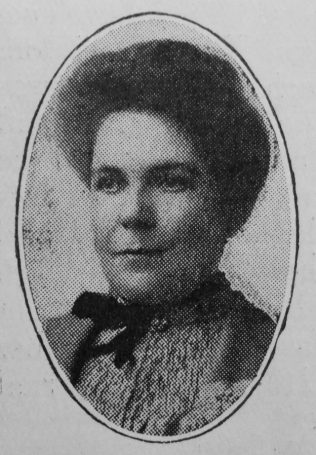 Mary Mackinnell, wife of Mr. John Mackinnell, of Castle House, Blackley, Manchester, and daughter of the late Rev. S. Doody, was born at Stalybridge, March 30th, 1858. From “her youth up,” our friend breathed a religious atmosphere. Her religion was her life, she was not in any sense what may be termed a public woman; her voice was never heard in the sanctuary, but her presence was felt there.

Her sphere was the private, obscure, though none the less effective, ministry of the home and also of the byeways of the Church. Her interest in Primitive Methodism was real and deep.

Her home was ever open to God’s servants and no one shared her hospitality without being the better for her influence and quiet geniality. Nor did she sit at home and wait for the opportunities that came to her there, but went out to seek them, and her last illness was accelerated by visiting some of the members of the Church who were ill.

Some twelve months ago our sister had a rather serious illness from which she never fully recovered. Her last illness was of only a week’s duration, and her death came upon all with a surprise that added an intense pain to her loss.

On the morning of July 9th, as a stormy night was ending, her spirit passed to that land, where there are no more storms and no more night. The interment took place on the following Saturday, conducted by the Revs. E. Ball and G. Armitage. A memorial service was held in our Barnes Green Church on Sunday evening, July 19th, when the writer preached from 1 Peter i. 24 and 25.

Amongst the numerous letters relating to her death we can refer to but one or two.

Rev. J. Whittle writes: “She was one of the choice spirits; a woman of singularly chaste and beautiful life.”

Rev. S. Bennett, of Southport, who officiated at her marriage nearly thirty years ago, also wrote a letter of appreciation and sympathy.

We commend her sorrowing husband, sister, and brother to Him who can not only sympathise but comfort and sustain in their hour of darkness.

Mary was born on 30 March 1858 at Stalybridge, Cheshire, to parents Thomas Doody, a PM minister, and Anna Maria Gostling. She was baptised on 25 April 1858 at Canal Street PM Chapel, Stalybridge.