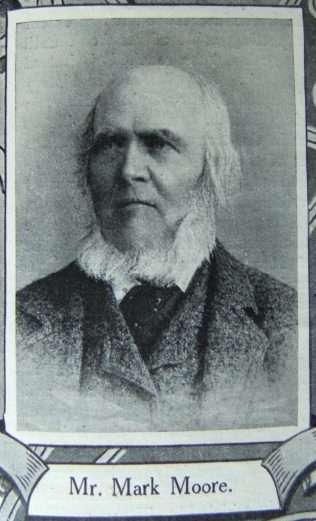 Mr. M Moore (who, we regret to say, hass passed away since this sketch was written) was the Steward of the Watton Circuit. For sixty-four years he had been a member of the Church. Connexional institutions had in him a genuine friend. He had taken the large magazine for sixty-three years. On coming to Great Cressingham he opened his house for preaching, and many found Christ there. Subsequently he built a chapel, and a few years later presented it to the Connexion. His great delight was in preaching the Gospel. Eloquent, quaint, and above all deeply spiritual, he was for over sixty years in great request. Though eighty-six years of age he was a member of the Y.P.S.C.E and to the end honoured his pledge. Religious services were his recreation. He was delegate to District Meetings several times, and twice to conference. After a married life of sixty-two years he lost his wife. She was his helpmeet in all the service for the Church.

Mark started his working life as an agricultural labourer. On moving to Great Cressingham he became a grocer and draper.