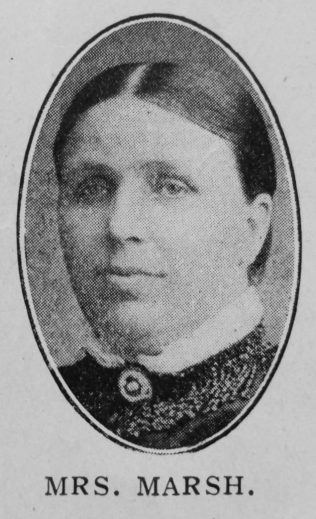 Our Stafford Street Church, Walsall, has suffered heavily in recent months by death. The last to be taken from us was Mrs. Marsh. She was born at Dudley on December 1st, 1834, and passed away March 30th, 1912, in her seventy-eighth year. For about fifty years she was an honoured and devoted member of our Church. Her husband has been a popular local preacher for many years, and until health failed was in much demand.

Mrs. Marsh cheerfully made the sacrifice necessary that Mr. Marsh could leave home for his Sunday duties. She loved the gates of Zion; the services of the sanctuary were precious to her. She was large-hearted and generous. It was a real delight to her to entertain the Lord’s servants. She was universally held in the highest esteem. She was an exemplary wife and mother, and was rewarded by the supreme devotion of both husband and children.

The last years of her life were marked with very great suffering. Strong in faith, rich in love, and abounding in hope she passed in triumph to her eternal rest.