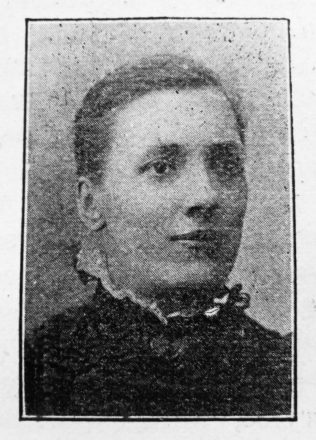 Mary Ann Maplesden was born in the parish of Bethersden, near Ashford, Kent, on August 28th, 1861. Her parents were Wesleyans, and their daughter Pollie, who was the eldest of the family, attended the Sunday School with the other members of the family, and in time became a very acceptable teacher.

Very early in life she was brought under good influences, and about the age of fourteen she was converted, and from the time of her conversion to the end of her pilgrimage it was a solid building of character which was beautiful in all its relationships. Her faith, cheerfulness, and affection, were predominating characteristics.

She was married to Mr. George Maplesden of Folkestone, on November 3rd, 1881, by one of our ministers the Rev. Chas. Harrison, and for upwards of twenty years with her husband was a member of our church there, and their house was always a home for the ministers and they ever regarded it as one of their greatest privileges to entertain the preachers either ministers or laymen. Of her it might be said, “She hath done what she could.’’ Whatever she did was always done cheerfully, that was the dominant note of her life.

In 1902 the family removed to Dover, when they experienced a period of untoward circumstances, making a great change in their worldly position, yet her character and life only manifested more clearly her trust and firm grip of divine things.

In March, 1905, she was taken ill and confined to her bed, by what was at first thought to be only a passing trouble, but which was soon discovered to be cancer of the bowels. As soon as possible she went to one of the London hospitals and underwent two operations which afforded relief for the time. While here she was visited by the Revs. G. Wood and I. Dorricott, and a number of personal friends, whose visits were much appreciated and very helpful. After being in hospital for seven weeks she returned home considerably relieved but quite an invalid. She attended the services only four times after her return and gradually weakened till the end came. She delighted much in the visits of her pastor, the Rev. P. Kay, who has been most kind and unremitting in his ministrations. Her illness was borne with the greatest fortitude and Christian resignation. There was no fear, no murmuring, it was a victory all along the line; such a life, such a death explained only by the word faith.

She leaves behind a husband and four sons, the youngest of whom is six years of age. Thus passes away from the home and church one whose life of forty-four years was all too brief for our human view of things.

Mary was born to parents Edward Barton, a farm bailiff, and Mary Jane.

She married George Maplesden (1855-1931). George was a wheelwright (1891) and a coach builder (1901). The coach building business obviously failed causing the move to Dover. The 1911 census shows George back in Folkstone working as a wheelwright.