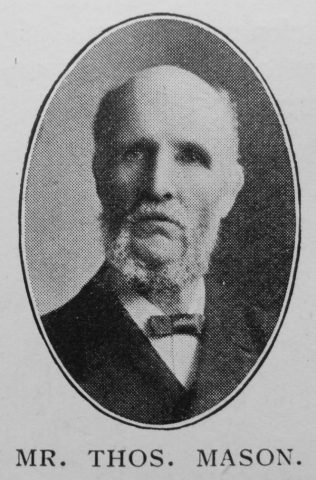 The Houghton-le-Spring Circuit has suffered a great loss by the death of Mr. Thomas Mason, of Philadelphia. The oldest local preacher on the plan, he ever took a deep and active interest in the welfare of the circuit. He was a well-known and prominent figure in northern Primitive Methodism, a member of the Sunderland and Newcastle District Committee, twice represented the district at Conference, and by his death a prince has fallen in Israel. Ministers never had a better friend, and those who knew him best loved him most. Ministers and laymen were ever welcome at his home and table, where the warm-hearted generosity and hospitality of Mr. and Mrs. Mason were demonstrated.

His mind was a rich repository of circuit events, and he remembered dates and names with exceptional mental agility. A preacher of the evangelical type, he was “not ashamed of the Gospel of Christ” and preached the glad tidings of salvation. He ever had the courage of his convictions, and defended them at all hazards. He was held in the highest esteem by all who knew him, and if “To live in hearts we leave behind is not to die,” then our brother truly lives, for he is enshrined in the heart and memory of his many friends who mourn his loss.

That subtle and deadly disease, cancer, dogged his steps for the past three years. He bore his affliction with brave, patient, Christian fortitude, and not a murmur escaped his lips, and after making all arrangements for his funeral, he passed peacefully away on Monday night, November 28, at the age of sixty-eight. He leaves a widow and family of one son and two daughters to mourn his loss.

The funeral took place on Thursday, December 1. A short service was held in our new Herrington Chapel, at which the Revs. T.J. Watson, A.J. Chessum, J. Tweddle, and E. Cairns took part, and Rev. J.W. Hutler gave the address.