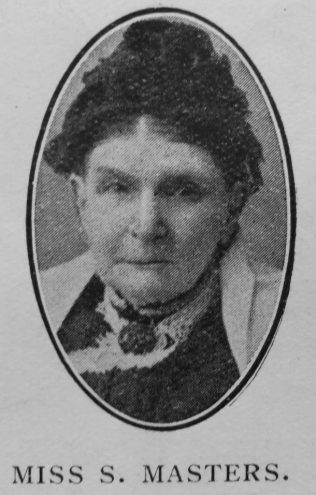 One of the oldest—if not the oldest— members of our Society recently passed to her everlasting rest in the person of Miss Sarah Masters, who died in her 97th year. Born at Yarmouth in 1813, she became a member of our Church when 16 years old, which means that she was actually a member for 80 years.

Removing to Murrow (Cambs.) in 1865, she took charge of a P.M. Day School for six years. Leaving Murrow in 1871 she kept house for the Rev. H. Worth until 1874, after which a few years were spent at Wisbech, until in 1880 she settled at King’s Lynn. From here she journeyed to Sheffield to benefit by the watchful, loving care and unfailing service of the Misses Collins.

Having lived such a long life her reminiscences of the founders and pioneers of Primitive Methodism were very piquant and enjoyable. She had met Hugh Bourne, William Clowes, James Carrer, Robert Key, and many another now called to the land beyond while she would recount with keen appreciation and pride the struggles, trials, and triumphs of the early Methodists, their arduous labours, long and toilsome journeys, meagre salaries, and lack of creature comforts. These ministers were her heroes, our literature her classics, and in all her life she never wavered in her loyalty to our Church.

The end came December 21st at Lanchester, Co. Durham. Her mortal remains were interred at Dipton, December 23rd. The Rev. B. Dennison conducted the service, and some of the oldest members in connection with our Church acted as underbearers. Never having married, and being early left practically alone in life, she found a deep joy in serving and shielding others. To the writer especially she gave an unfaltering affection, a home in his early years, a priceless training in regular attendance at the public means of grace, and an example of steadfast piety which he will ever remember.

Sarah was born in 1813 at Great Yarmouth, Norfolk, to parents Charles, a mariner, and Ann. She was baptised on 30 January 1813 at St Nicholas, Great Yarmouth.