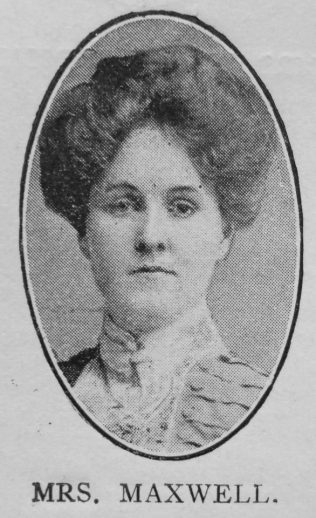 Maggie Pattinson, born July 24th, 1880, was married to Mr. Maxwell in 1906. For some time they resided in South America, but returned in June, 1909, to find her dear sister dead and buried.

After spending four months in her father’s home on the 20th October she gave birth to twin baby-girls. For a day or two all seemed well, and then with grim swiftness death came upon her, and on the morning of October 24th she went home.

One knew not whom to pity most, the wee bairns or the widower bowing  beneath the heaviest loss that comes to a man, or the parents quite broken up by this fell stroke.

Both in the circuit, where Mr. Pattinson is known and loved as a kindly man and helpful local preacher, and in the district he serves as Councillor, the liveliest expressions of sympathy are heard.

Margaret worked as a dressmaker before her marriage (1901).