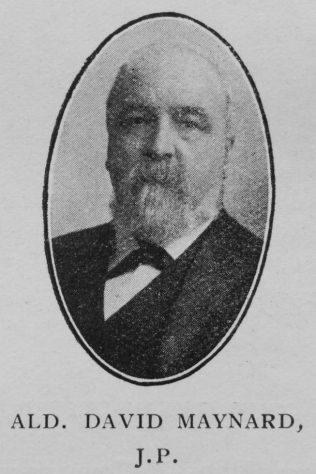 Transcription of obituary published in the Primitive Methodist Magazine by J. Reavley

Our St. Sepulchre Street Church, and also the civic life of the town of Scarborough have suffered a great loss by the death of Ald. D. Maynard, in his sixtieth year. Trained in its Sunday School, he was led under the ministry of the Rev. A. Kitson to decide for Christ in his twentieth year, and subsequently gave thirty-three years of unbroken service as a teacher. Never seeking the honour of office, but only the opportunity to serve, cherishing a noble simplicity of character and a generous interest in the welfare of his Church and town, he drew to himself, as few men do, the affectionate confidence of his Christian comrades and the universal regard and appreciation of his fellow-townsmen.

For many years he filled the office of treasurer to the St. Sepulchre Street Trust, and was always ready to give of his substance as the Lord had prospered him. Endowed with a fine physical frame and more than ordinary powers, he stood before his native town as a personality transparent, impressive and unique. He filled the position of Councillor for many years, he also served as Alderman, and later as Justice of the Peace, and but for failing health would have received the highest civic honour. Not often does a public man receive such a tribute as that paid to our friend by the Mayor of Scarborough: “He loved God with all his heart and soul, and his neighbour as himself.”

On the day of the funeral, Feb. 17th, an immense crowd filled the Jubilee Chapel, and vast numbers lined the streets. The service, attended by the Mayor and Council, was conducted by the Scarborough ministers and Revs. Geo. Bennett and T. Granger.

David was born in late 1850 at Scarborough, Yorkshire, to parents Abraham Maynard, a master mariner, and Eliza Leppington. He was baptised on 24 November 1850 at St Mary, Scarborough.