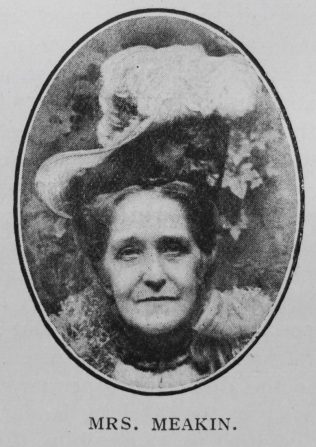 Transcription of obituary published in the Primitive Methodist Magazine by M.E.

Hannah, the beloved wife of the Rev. Thomas Meakin, was born and brought up in Bolton, Lancashire. From the first she was nourished in a home pervaded by a religious atmosphere. She inherited tendencies for good that under wise teaching, pious example, Sunday School and Church life, gradually evolved in a strong moral and religious character. It is not known when she decided for Christ. Her heart opened so gently that she scarce knew herself. Of the fact, however, there was no question.

Natural shyness prevented obtrusive speech. Her goodness was seen rather than heard. Her outward bearing was gentleness itself, but underneath it was a brave spirit that would steel itself to face any duty or difficulty as occasion required. Cautious, too, was she, giving to all her ear, but to few her speech. She was sensitive to a degree to anything that savoured of the vulgar, and would receive the slightest double suggestion with a detached silence.

When work needed to be done she was not behind any. Having overcome an instinctive aversion to bazaars, she would throw herself heart and soul into such efforts, and to some purpose, as the stalls with which she was associated bear witness. She felt it an honour to be actively connected with the serving of tables at the May Missionary Meetings. The sisterhood of those occasions was precious and of it she was a wee bit proud.

As wife and mother her interest and devotion were intense. Her husband and children revere her memory. For years she had been at intervals a sufferer. During paroxysms of pain how bravely she would endure, and how quickly as the pain was eased she became cheerful again!

She died on Sunday morning, the 25th of June. Those left behind do not sorrow as those without hope. In the lonely hour and evening walk, they think she companies their solitude. And though remembrance may provoke a tear, there still is joy in grief. On Thursday morning, June 29th, a large congregation gathered in the London Road Church, Dover, where a funeral service was held, conducted by several Nonconformist ministers. The remains were conveyed to the cemetery, East Finchley, London. Many friends gathered to pay the last tribute of respect to one whom they had learnt to love. Revs. D.T. Maylott, P Kay and W. Roberts took part in the graveside service.

Many, very many are the testimonies to her worth and the esteem in which she was held. Rev. J. Travis writes:—“I am very sorry to hear of the departure of your beloved wife. I have pleasant recollections of the respect she commanded when in her maidenhood in Bolton, and I have watched her with interest in her wider sphere as wife of a minister.’’

Rev. J. Whittle says: “How correctly you have epitomised her life: ‘Gentle and brave.’ I shall never forget her gentle, winsome, but strong character.”

Says Rev. R.R. Connell: “It was my good fortune to know Mrs. Meakin, a true lady, a real Christian, a devoted wife and loving mother. She was a grand Church worker and greatly helped you in arduous financial efforts, especially in your London work. She has gone to her reward on high, and earth is the poorer, especially our Church, for her loss.”

Hannah was born in 1844 at Bolton, Lancashire. I have not been able to unambiguously  identify her parents in online records.

She married Thomas Meakin, a PM minister, in the summer of 1872 at Bolton, Lancashire. Census returns identify four children.