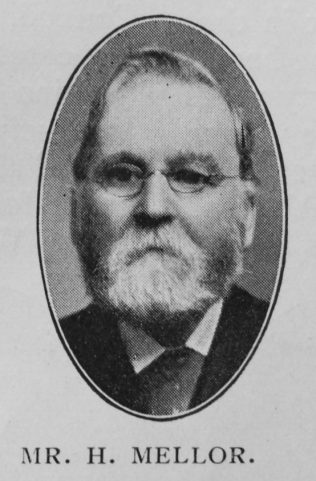 Transcription of obituary published in the Primitive Methodist Magazine by G.P.

The church at Henshaw Street, in the Oldham First Circuit, has recently lost many of its members by death, and to the number of the departed there has now to be added the name of Henry Mellor.

Henry Mellor was born February 5th, 1841, and died April 19th, 1910. When a boy he attended the Sunday School at Healds Green, and in his youth began a fifty years’ membership with our Church. His first work in the Church was that of Sunday School teacher, and he discharged his duties in such a way that his fellow-teachers made him superintendent of the school. He was also a class leader at Healds Green and a trustee of the chapel.

On removing to Oldham, he joined our church in Henshaw Street, and at once began to work in the school. He was soon called to fill the following offices:— Sunday School teacher, superintendent, class leader, society steward, trustee, and chapel steward. A few months ago he received the diploma for long service in the Sunday School.

The illness which terminated his life was of a painful character, but he endured it with Christian fortitude and patience, knowing “whom he had believed.” His remains were laid to rest in the Churchyard at Chadderton, the service being conducted by Rev. G. Parkin. Mr. Mellor leaves a widow, three sons, and a daughter, all of whom are members of our Church. He was a man of gentle disposition, free from ostentation, a lover of God’s house, and concerned about its welfare.

He married Sarah Jane Leach (1853-1911) in the summer of 1886 in the Oldham Registration District, Lancashire.