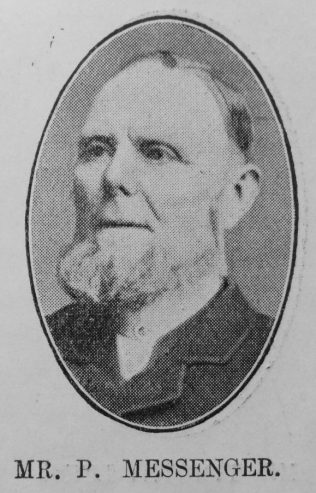 Transcription of Obituary published in the Primitive Methodist Magazine by J.G.C.

Maryport Circuit has lost a stalwart. Peter Messenger was a local preacher for about fifty years. With a good presence, fine ringing voice, and abounding vitality, he did a good day’s work.

Born in January, 1832, converted in 1858, he passed into the realms of the blest on September 2nd, 1909. Quite early in life he became concerned about religious things, and before his own conversion induced a champion wrestler to attend a service, then envied his friend the forgiveness of sins and change of life resulting therefrom. Subsequently at a camp meeting, at which the Rev. Moses Lupton preached on “Wilt thou be made whole,” Bro. Messenger himself found Jesus Christ to be his Saviour. He soon found congenial work to do. The starting of hymns and Sunday School teaching, with rapid promotion to the Sunday School superintendency, made him thoroughly at home with our people. He was soon, however, a candidate for the plan, and in this sphere he served his generation nobly to the glory of God. At camp meetings he was a strong man. To the last when enfeebled by age, he could not resist an encouraging “Amen,” “Yes. yes,” or “Sure,” when the preacher was enforcing some telling truth. In public prayer as well as in preaching the old time “unction” invariably attended his utterances. Honour came to him by his election to District meeting, and Conference as delegate. Recently his old friends, Isaac Mossop and John Rook, went home to God, and now that he is gone no man survives to tell of that generation. The writer visited him in his illness, and his heart strangely warmed to the old man when learning of the Revs. Moses Lupton and Adam Dodds, who went through the district “like a flame of fire!”

At the funeral a very large and representative gathering attended. An “In Memoriam” service was conducted by the circuit minister on Sunday morning, September 12th. We bid him farewell till the morning when we meet again through Him who loved us, and gave Himself for us.

Peter was born on 31 December 1829 at Whitehaven, Cumberland, to parents Robert, a mason, and Hannah. He was baptised on 13 January 1830 at James Street Scotch Presbyterian Chapel, Whitehaven.

He married Martha Ritson (abt1831-1877)  in late 1852 in the Cockermouth Registration District, Cumberland.

He married Ann Elliot (1843-1924) in the summer of 1877 in the Cockermouth Registration District, Cumberland.   Census returns identify four children.

Note: The is a discrepancy in birth date between online records and the obituary.