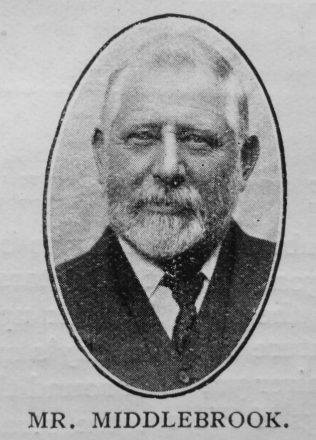 Transcription of obituary published in the Primitive Methodist Magazine by T. Vaughan

Mr. G. H. Middlebrook was born in Swinefleet, January 1st, 1856. His father and grandfather were also members and officials of our church. The latter was a Circuit official, and Chapel Secretary when the Swinefleet station was made in 1827. Throughout its history, Swinefleet has always had a Middlebrook among its workers, and long may they continue, if they be of the quality of our friend who passed to his rest February 20th, 1910. Henry Middlebrook was a most consistent, devoted, and loyal Primitive Methodist. For 10 years he filled faithfully the office of Circuit Steward. He was Class Leader for over 20 years, and in the position of School Superintendent, which post he held for 30 years, he excelled.

His strong will and kindly heart, under a somewhat brusque exterior, gave him great command over the children, who felt for him a true and tender affection. He filled for many years the position of Choirmaster. His powerful voice and musical taste made him a prominent leader in the service of praise.

Outside church life he was Overseer, Member of Parish Council, and a Manager of the Provided Schools in the village. In his removal our church has suffered an irreparable loss.

For some months Bro. Middlebrook was in rather a precarious state of health. On Thursday he was seized with paralysis, from which he never recovered consciousness, and as the following Sabbath reached its close, he entered on an eternal Sabbath, and passed into everlasting day.

He leaves behind a widow and four sons, all associated with our church. He leaves behind a beautiful example of Christian consistency, and the good name, rather to be chosen than great riches. The interment was the occasion of the manifestation of great appreciation of his sterling character, and of deep sympathy with the bereaved family. Rev. T. Vaughan improved his death to a large congregation death to a large congregation on the Sunday morning of March 6th.

In the case of one who had lived so full and varied a life death creates a painful gap. But family and Church and community have many  consolations—in the memory of a useful and noble life, the heritage of Christian character and life, and the hope of reunion beyond the grave. But the gap will be there all the same. There is yet this further thought to those who remain, that they are linked by the life of our departed brother with a past stretching beyond even his day. This will be an incentive to faithfulness and devotion. There is a historic tradition to be maintained, a name to keep unsullied, a work to be carried forward to a  higher stage. ‘‘Blessed are the dead which die in the Lord, for they rest from their labours and their works do follow them.”