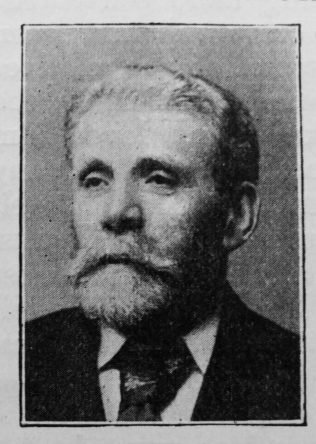 Mr. Thomas Mills, of the London Fields Society, Hackney Road Circuit, was born at Bradfield, Essex. He met a tragic death on Saturday, December 23rd, 1905, just after midnight. He left his home just before 12p.m. for night duty at Bishopsgate Goods’ Station, G.E.R.; on reaching the top of the staircase at London Fields, he fell down and died immediately.

At two o’clock the same day, his younger daughter was to be married to James, the son of Rev. J.F. Porter. The news of Mr. Mills’ sudden death came as a great shock to both families, and called forth general sympathy.

He was converted at an early age, and had been associated with our church ever since. For forty-two years he had been engaged on the Great Eastern Railway, and by his consistency he had won the confidence of the company, and the greatest esteem from his work fellows. In the home he was greatly beloved by his wife and family; as a brother in the church he was revered by all, and his memory will long be cherished. In friendship he was constant, in duty faithful, in sickness patient; but few men have had such entire mastery over themselves.

That he had won universal respect was indicated at his funeral, which took place on Thursday afternoon, December 28th, by the large attendance of relatives and friends, including railway officials and work fellows. The funeral service, held in London Fields Church (of which he was a trustee), was conducted by the Rev. C. Spooner. Prayer was offered by the Rev. J.F. Porter. A large company gathered around the grave in Chingford Cemetery, which was greatly augmented by an additional number of former comrades. The Rev. C. Spooner officiated at the service. The home and the church are the poorer on the account of his departure, but heaven is the richer.

Another excellent brother and member of London Fields, Mr. Sills, about the same age, having died within a fortnight after Mr. Mills, a dual memorial service was held on Sunday evening, February 4th. The service was largely attended, the Rev. C. Spooner preached from the text, “For they are without fault, before the throne of God” (Rev. xiv. 5); suitable anthems were sung by the choir.

Thomas was born in 1844 at Wix, Essex, to parents William, a carter, and Hannah.