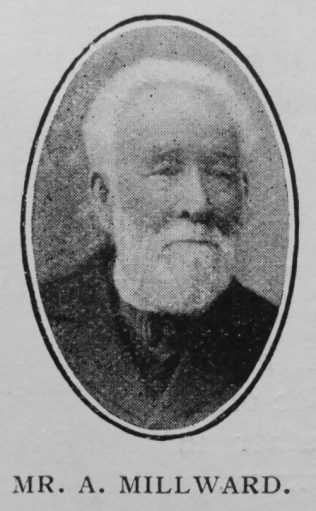 Transcription of obituary published in the Primitive Methodist Magazine by G.W.

Mr. Alfred Millward, of Southampton, passed away on January 11th, 1912, at a ripe old age, after sixty-seven years of Christian life, more than sixty-one of which were spent in active service in connection with our South Front Church.

Our brother was born at Rotherhithe, London, May 3rd, 1823. At nineteen years of age he came to Southampton, wild and reckless as a young man. When twenty-one years of age he was converted to God in a week-night prayer meeting among the Baptists. For a short time he remained and worked with them. He was twenty-three years of age when he joined our people, and for the rest of his long life bore an  unblemished character. He was a Preacher for upwards of sixty-five years, for over fifty-four years he was Superintendent of South Front Sunday School, and not until he had reached the age of eighty-two did he relinquish this sacred task. His work among the young was simply a passion.

Canon Wilberforce, speaking at a great temperance demonstration in the town, said there was one man there who ought to be thanking God—Mr. Alfred Millward. He was the first man to start the first Band of Hope in Southampton in 1850.

He was a Primitive Methodist. He was full of the very sunshine of religion. He died as he had lived, serene and happy, with an unbounded faith in his Lord, on January 11th, in his eighty-eighth year. He was interred in the Southampton Cemetery by Revs. G. Wood and J.R. Barnsley, amid a large crowd of sorrowing friends. On January 21st an impressive memorial service was conducted by Rev. Geo. Wood. Representatives of temperance and other societies were present.