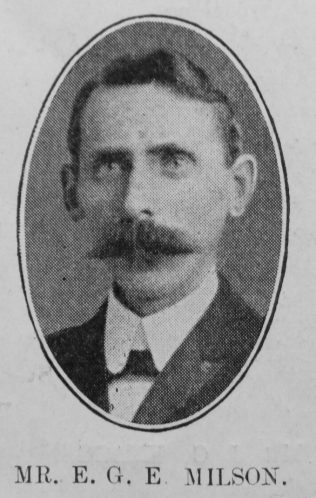 At sunrise on June 1st came the sunset of the earthly life of Mr. Enoch G.E. Milson, at the comparatively early age of forty years. This event took place at Matlock, where, a few days afterwards, the spirit vacated dust was laid to rest. The Rev. James Burton conducted the funeral ceremony, giving a suitable appreciation of our beloved comrade and fellow-worker.

In early life Mr. Milson was very athletic, and the glamour and glory of sport and recreation led him to pursue these things to the neglect of nobler things. The value of ancestry and proper home surroundings, however, proved effective for good. The memory of his glorified father, the Rev. Parkinson Milson, was ever a restraint, and the day of Christian decision was sure to come.

Having entered the church, his aptitude for Christian service was soon discovered, and he served for a while as assistant to the Rev. Thomas Jackson at the Clapton Mission, and afterwards under the Rev. Samuel Horton, at Edinburgh. He eventually became an evangelist, and had success, particularly at Bolsover, where scores of young people were converted.

During these later years, however, the tide of life was ever trying to bear his enfeebled barque across the river. He made a brave struggle to tarry a little longer on the earth-side, but an attack of pneumonia found him without reserve strength, and his frail craft “crossed the bar” to the heaven-side and entered the haven of eternal rest.

He was most acceptable in the pulpit, had good organising ability, was an expert penman, a genial companion, and a useful musician, and so won the hearts of those who came in touch with him. For the sorrowing widow, aged mother, and other grief-stricken relatives our sympathy is stirred.

Enoch was born in the summer of 1868 at Filey, Yorkshire, to parents Parkinson Milson, a PM minister, and Jane Southern.

A newspaper article in Hull on 8 October 1906 reports that he was conducting a fortnights mission in the Glossop area. It also records he used to play for Grimsby Town.

He married Agnes White (b1870) in the summer of 1906 in the Matlock Bank PM Chapel, Derbyshire.

Agnes travelled to Canada in 1910.