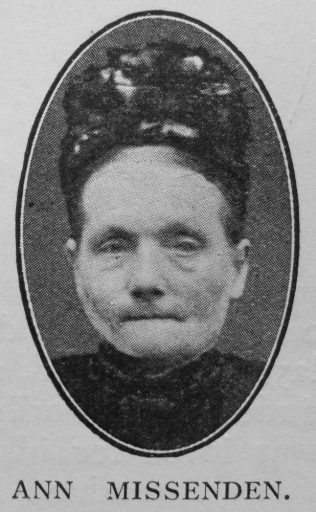 Mrs. Ann Missenden was one of the best Church workers it has been our joy to know. From her youth up she took the deepest interest in the Sabbath School at Newton Longville. She, too, was but sixty-eight years of age when the call came to higher service, but she had obtained the Sunday School Diploma, of which she was justly proud.

Her home was always open for the ministers, and many letters of condolence testified to the kindness received. The gracious influence of her Christly character was felt by all who came into contact with her. She served her master quietly and unobtrusively. Her illness extended for nearly two years, and though suffering much, it was all endured with patience and fortitude. She will be greatly missed by her class of girls, for she taught as long as she could get out. To the sorrowing husband and only son our tenderest sympathy goes out.

She married Thomas Missenden (1832-1914), who worked the land, in the summer of 1879 at Newton Longville. She supplemented the family income as a straw plaiter (1881). Census returns identify one child. Thomas had six children in a previous marriage.