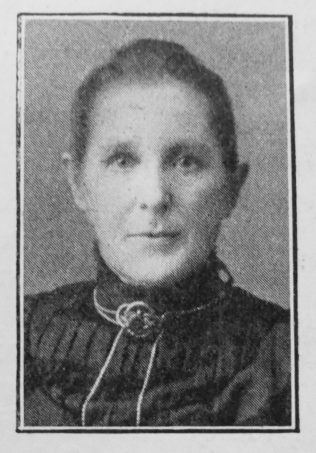 Transcription of Obituary in the Primitive Methodist Magazine by John Jenkins

The death of Mrs. Mitcheson, on Nov. 21st 19O6, after months of suffering, has created a gap in the home and church at Page Bank, in Spennymoor Circuit, that is impossible to fill. In the year 1876 both Mr. and Mrs. Mitcheson surrendered to Christ in our Page Bank Chapel. After their conversion their home was always open to the preachers, and it would be impossible for the ministers of the circuit to forget the delightful hours spent under their hospitable roof. In estimating the worth of our departed sister we may mention, her love of God’s house, her sound though unostentatious piety, her kindness and devotedness as wife and mother, her final beautiful resignation to God’s will; and her triumphant exit from earth to heaven.

In short she was a true, strong, courageous, high-souled woman, who was bound to influence for good all who became acquainted with her.

Family worship was always observed in the home, and there is no wonder that the five daughters and the son joined our church; one daughter marrying some time ago Rev. H. Fletcher.

“How you will miss her in the home, the cheery voice, the kindly presence, so forgetful about herself and so considerate about others,” writes Rev. E. Phillipson.

Rev. D. McKinley writes: “She was a brave Christian woman, and a loyal Primitive Methodist; her generous hospitality and winsome ways will never fade from the memory of those who knew her.”

Rev. W. Shipley says: “I have distinct recollections of your wife’s gentleness and uniform kindness.”

The Rev. J.G. Bowran writes: “Her kindness and hospitality, her motherliness and brightness were the charms of her nature.”

Letters were also received from the circuit quarterly meeting, the Christian Endeavour Society at Page Bank, Revs. J. Bennett, J. Tweddle, and many others, expressive of their sympathy and esteem.

Jane was born abt1847 at Satley, Co. Durham, to parents George, a husbandman, and Ann.