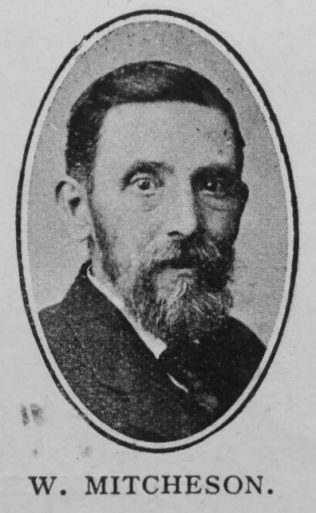 Transcription of obituary published in the Primitive Methodist Magazine by I.G.

When Bro. W. Mitcheson passed away our Church in the Spennymoor Circuit lost a loyal and devoted member, and the Page Bank Society one of its most reliable and enthusiastic workers. Bro. Mitcheson  joined this society in January, 1876, and from that time until the end of his life was a faithful member. He was Society steward for 12 years, a Class Leader and Trust Treasurer.

His home from the very beginning of his married life was always open to the preachers. The cheery welcome, the generous hospitality, and the gracious ease with which the conversation turned on to the deep things of the Spirit and the concerns of the Lord’s Kingdom will remain among the choicest memories of those whose privilege it was to meet him in the family circle. A good, kind father has gone from this earthly home—but gone to greet that dear wife and mother who passed away before him.

He was seldom absent from any service and his presence was always a distinct inspiration. Deeply loved by all in the Society, many in the village who never enter the church bear willing testimony to his goodness. He always took a great interest in the business side of the society, and his wise words, charitable and sympathetic disposition, always made for progress and the cultivation of peace and goodwill. His interest in the affairs of the other societies in the Circuit was very marked. He was a liberal supporter of our Connexional institution, and believed that Primitive Methodism was worthy of the best that he could give.

In his days of suffering— days brightened by the tender ministrations of his daughters—his faith never wavered. Our brother died June 13th, 1911, at the age of 65.

William was born abt1846 at Sherburn Hill, Co. Durham, to parents Ralph Mitcheson, a blacksmith, and Jane Moore. he was baptised on 8 February 1846 at Shadforth, Co. Durham.