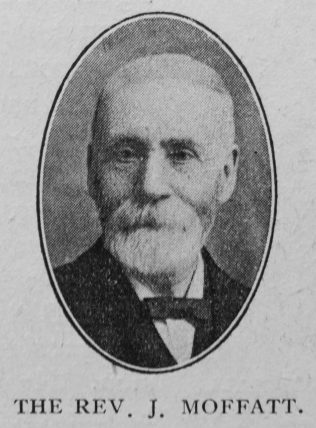 The passing of the Rev. J. Moffatt, on March 7th, 1922, at Brooklands Terrace, Sunderland, breaks another link with the past. He was a native of Sunderland, and dated his membership back to the days of Flag Lane. Born in 1840, he became a minister in 1875; but for years, as a preacher and temperance advocate, he did valuable service in the town and district.

He began his ministry at Durham, and travelled at Whitehaven, North Sunderland, Seaton Delaval, Prudoe (a branch), Shotley Bridge, St. Helen’s Auckland, Spennymoor, Brandon, Low Law, Yarrow and Hexham. In these circuits, often under great physical disability, he nobly did his duty —members added, debts reduced— and to-day his name is as ointment poured forth, During his superannuation he rendered valuable service to Sunderland I. Circuit.

Official life had no attraction for him, his only aim on his circuits was to be a workman who needed not to be ashamed. Quiet, gentle, loving; in the homes of the people, he was ever welcome, and many a father and mother thanked God when J. Moffatt visited them. He was loved by all.

As a preacher he was thoughtful and persuasive, his messages winning their way into the hearts of the people. It was the writer’s privilege to visit him in his, last days. His thankfulness for the privilege of service to God and the people, his simple faith in things eternal, his confidence in the Great Father, made a visit a benediction.

On March 7th he passed quietly to the Homeland, and on March 11th, at his request, a short service was held in the home, conducted by the Rev. A. Parkin. He was borne by members of the church to Pallion, where the Rev. F. Winterburn and F.W. Beal officiated. A large company gathered from South Shields, Hebburn and the Sunderland Circuits. At the graveside the committal service was read by the Rev. A. Parkin, and prayer offered by the Rev. H. Fletcher. Our hearts go out in sympathy for his lonely widow waiting for the re-union.

Before entering the ministry, John worked as a ship rigger (1861).