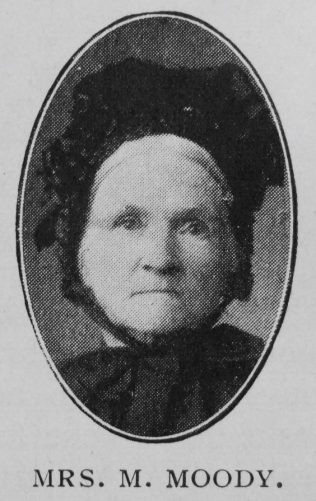 Transcription of obituary published in the Primitive Methodist Magazine by T.C.R.

Mrs. Matilda Moody was born at Whiteparish, near Salisbury, 1833, and died at Landford, in the Romsey Circuit, February 1st, 1911, aged 77 years. In early life she found the Saviour, and joined us in Church membership. For more than forty years she was a Sunday School teacher, and a Local Preacher for thirty years.

She was a person possessing many gifts, but pre-eminently the gift of prayer. Her life was made beautiful and useful by her fervent and powerful exercises of prayer both at home and in the church. She was interested in all the departments of Church life and service. The missionary cause lay near to her heart, and for years the missionary box was kept in her home. One of the delights of her life was to give a donation to the Centenary Thanksgiving Fund.

She was one of the most sainted women we have known. She was a great inspiration to all the preachers, and she very often spoke words of encouragement and appreciation to them. Her end came somewhat suddenly. She was taken ill in January, and after one month’s sickness she fell asleep in Jesus. Her funeral was largely attended by friends from many of the neighbouring villages. The first part of the service was held in the Landford Chapel, where she had worshipped for forty-five years.