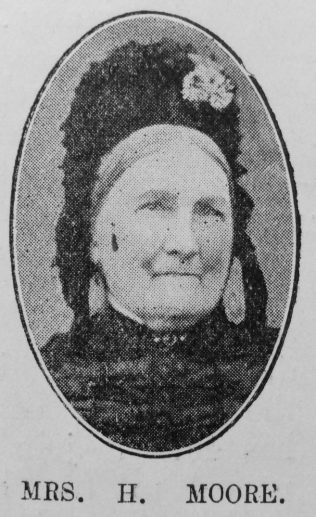 Transcription of Obituary published in the Primitive Methodist Magazine by J.H.R.

Mrs. Moore, the wife of Mr. Mark Moore, of Great Cressingham, was known to a wide circle of friends. For just over sixty-two years she was his true helpmeet. God prospered them in business, and she heartily aided her husband’s efforts to further God’s cause at home and abroad. Born eighty-six years ago at Broome House, Shropham, she came in her earliest days under Christian influences. Her father and mother, the late Mr. and Mrs. Skipper, opened their house for the preaching of the gospel, and one of Mrs. Moore’s most precious memories was a visit there by Hugh Bourne when she was a girl. She followed her parents’ example by opening her home for religious services, and there many rejoiced in the joys of forgiveness. Her welcome to the preachers and friends of the cause was always hearty, and her hospitality unbounded. Many in the village where she lived have blessed her for her quiet and effective acts of kindness in times of need. She was a true mother an Israel.

For several weeks she bore with much patience and hopefulness a trying affliction. She believed in Christ as the conqueror of death and knew no fear. Her release from suffering came on Sept. 11th, and on the 14th she was buried in the village churchyard. The vicar of the parish and the Rev. J.H. Rose conducted the: service. The latter conducted a memorial service in our own chapel on October 3rd. Much sympathy is felt for Mr. M. Moore and his family in this great bereavement.