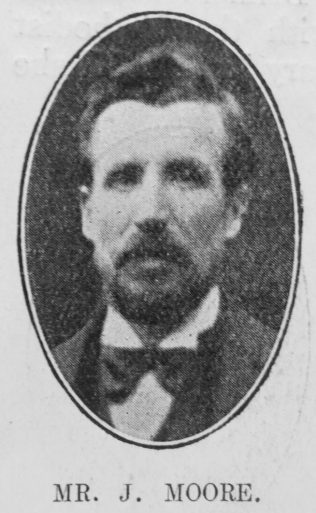 Transcription of Obituary published in the Primitive Methodist Magazine by F.W.N.

Dudley Port Society in the Oldbury Circuit has sustained a heavy loss through the removal of Mr. Joseph Moore, who exchanged suffering for rest on Thursday, January 21st, at the age of fifty-five. A native of West Bromwich, in his youth he came to live in Dudley Port. He was converted some thirty-five years ago, the whole of his Christian life being spent in fellowship with this one church. His service has been untiring, and was only relinquished when weakness made its continuance impossible.

As Sunday School worker, class leader, steward, church treasurer he has faithfully served. For upwards of twenty-one years he was secretary to the Trust.

Perhaps the outstanding trait of his character was his quiet spiritual forcefulness. He was an idea sick visitor. In hours of sickness and bereavement he was eagerly sought and welcomed. He himself had been trained in the school of suffering. For years he fought bravely with pain and weakness, and in March, 1908, was entirely laid aside by the painful internal malady which proved fatal. The songs of the Lord were often his solace in these night seasons, and when the paroxysms of pain were keenest, he might be heard singing “Rock of Ages,” as if to drive back the dark powers which made onslaught upon him.

To visit him was to be taken to heaven’s gate. Old friends carried him to his resting place in the Tipton Cemetery, prior to which a service was held in the church he loved so much, conducted by Revs. W.H. Taylor, and F.W. Norris. He leaves a widow and numerous children, to whom our hearts go out in prayerful sympathy. He was a good man—quiet and retiring, but loyal in all life’s relationships and the memory of his sterling piety in life and calm trustfulness in death will long linger with us, as a fragrance begotten of contact with heaven.

“How blest the righteous when he dies,
When sinks a weary soul to rest!
How mildly beam the closing eyes,
How gently heaves the expiring breast!”

Joseph was born in 1853 at Tipton, Staffordshire, to parents William Moore, a blacksmith (1871), and Ann Fletcher. He was baptised on 28 August at Christ Church, West Bromwich.

Joseph worked in an ironworks as a stock taker.

He married Elizabeth Smart (abt1856-1912) in the spring of 1880 in the Dudley Registration District, Staffordshire. Census returns identify eight of eleven children.

Note: Online records identify his birth in Tipton rather than West Bromwich.