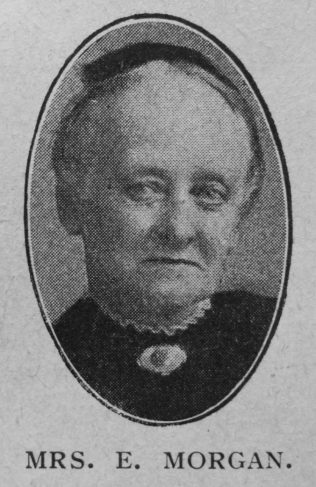 A life of beautiful ministry reached its close on September 2nd, 1923, when Mrs. Emily Morgan, widow of the late Rev. F. J. Morgan, of Rotherham, passed to the Homeland. She was born and spent her early life in the beautiful village of Brassington, Derbyshire. Her parents were of the Anglican Church but people of broad views and sympathies, hospitable, and cheerfully opening their home to the Primitive Methodist preachers of the Belper Circuit. Thus it was that the daughter came under the spell of their ardent piety and joining herself to one of our societies, which worshipped in a cottage, became a member and Sunday School teacher.

Attending the services three times every Sunday, involved nine miles of walking, and when her parents moved farther away she walked the greater distance. That was characteristic of her. The same spirit of thoroughness and devotion she maintained to the end. Her life’s course was revealed with the coming of a young minister to the Belper Circuit, for all subsequent events proclaimed their union to be the work of Providence. The young minister took away as bride the village maiden, the beauty of whose spirit outshone the beauty of face and form. And so, together, they went along life’s pathway, humbly and earnestly spreading the truth as it is in Jesus, both by precept and by example. Rural circuits were mainly the scene of their ministry, but always provided scope for their enlightened and progressive views and lofty ideals.

Mrs. Morgan was an ardent Temperance worker and stood for the application of her religion to the affairs of human society. Both in the home and in the Church the influence of her marked and gracious personality will long abide. She was eminently fitted for the sphere in which her life was spent. Sincerity and truth shone through her words and deeds. She loved the people and they felt it and returned her love by their own.

In 1908, on her husband’s superannuation, they came to Rotherham and joined our Wellgate Church. Nearly five years ago he obeyed the summons to the Father’s House above. From that time she calmly awaited the call to rejoin him. Of her four children (three daughters and a son) one is the wife of the Rev. J.J. Parlow, two are in membership with our Church at Wellgate, while the son is also an active and devoted Christian worker.

Of such a mother it is natural that “her children rise up.and call her blessed.”

Before her marriage Emily worked as a dressmaker (1871).