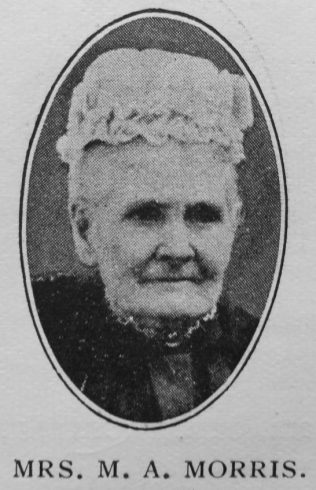 Transcription of obituary published in the Primitive Methodist Magazine by B.B.B.

Mrs. Mary Ann Morris, the beloved wife of John Morris, of Gloucester, was born in the County of Kent in 1836, of parents associated with the Anglican Church. In Hereford she became acquainted with her future husband, whom she married in that city in 1858. On coming to reside in Gloucester they attended the services in the old Chapel, Barton Street, under the ministry of the Revs. James Hall and Enoch Ball, and were both received on trial for membership at the December Quarterly Meeting, 1862.

From that time to her death on November 9th, 1909, she had an unbroken membership with the Barton Street Church. For 47 years she was one of the quiet workers, always ready to render any assistance she could to the Church she loved. In all financial efforts, both in the old and new Barton Street Churches, and in the other churches in the Circuit, bazaars, tea meetings, anniversaries, she manifested a keen interest.

She was a model wife and mother, attentive to her husband and children, thrifty and shrewd in her management of the home, firm but kind in the training of her children. She much enjoyed a lively service whether for worship, prayer or fellowship.

Though somewhat out of health for six years, she was only confined to bed for about a week when the call came to the fuller life. There was no uncertainty or doubt in her last hours; she was resting in the work of Jesus. Her last words were: “My work is done, so tired, so tired, good night.”

The funeral services were conducted by Revs. T.R. Holtby, T. Randall, and T.G. Gardner, and were attended among others by a large number of Bro. Morris’ fellow workers at the Wagon Works, where for over 50 years he has held a responsible position.

Mary was born in 1836 at Paddington, Middlesex. I have not been able to identify her parents in online records.